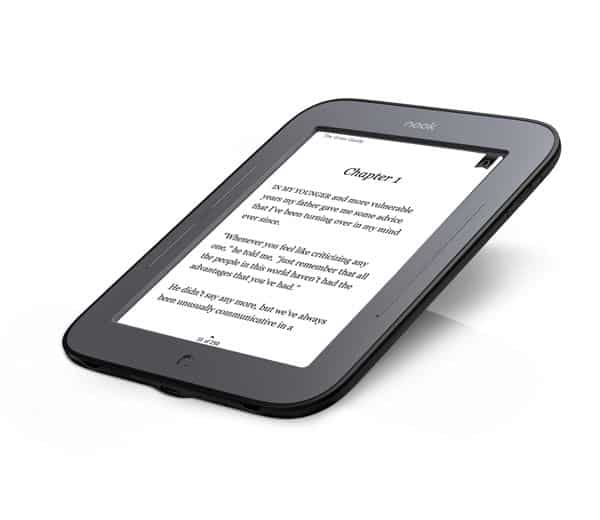 Calling it the “simple touch reader,” Barnes & Noble showed off the latest version of its Nook e-reader in New York on Monday—a smaller, lighter, and touchscreen-packing competitor to Amazon’s ever-popular Kindle.

Slated to ship next month for $139 (you can pre-order one right here), the 7.5-ounce, 5 by 6.5-inch Nook looks a little like a squarish, paperback-sized tile, and yes—you’ll be able to turn pages on the Nook’s six-inch e-ink display (the same size as the Kindle’s) simply by swiping your finger.

The shorter, squatter Nook is also missing the Kindle’s full-on QWERTY keypad—and indeed, the only button on the front of the Nook is a single Home key. 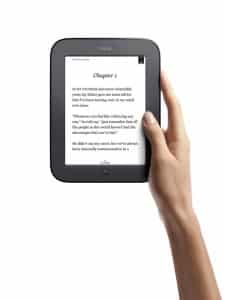 Barnes & Noble execs took several more shots at the Kindle, noting that the new, 0.47 inch-thick Nook boasts two month’s worth of battery life on a single charge—twice as much as the Kindle’s—while the compact design (ten percent “less bulk”) and soft, contoured back will make for a more comfortable fit in your hand. Or so they say.

Other specifications include 2GB of on-board storage, with the possibility of 32GB more thanks to the microSDHC memory slot; six on-screen fonts, along with seven different sizes; and the ability to share book recommendations with pals via Facebook, Twitter, and email.

But back to the touch-sensitive e-ink display (which, by the way, is also a feature of the just-announced eReader Touch Edition by Kobo)—how did Barnes & Noble do it? After all, Amazon execs have long contended that adding a touch-sensitive layer to an e-ink display would reduce its overall contrast, all for the somewhat subtle (according to Amazon, at least) improvement of being able to swipe to turn a page rather than click a button.

Well, both B&N and Kobo say their new e-ink displays use infrared technology to sense your fingertips, a method that keeps any reduction in screen contrast to a minimum—and indeed, Barnes & Noble reps are crowing that the display on the new Nook has 50 percent more contrast than on the first e-ink Nook.

And with its revamped e-reader, B&N has demonstrated in dramatic fashion the main benefit in going the touchscreen way: a smaller device thanks to the jettisoned QWERTY.

Nice, but the Kindle still has a leg up on the new Nook in at least one regard: 3G, with the touch-sensitive Nook coming only in a Wi-Fi version.

So, which e-reader do you think you’d prefer: the larger but QWERTY-packing Kindle, or the smaller, touchscreen Nook?

Correction: The original version of this post incorrectly stated the new Nook’s estimated battery life. According to B&N, it’s said to last for two months on a single charge, not one. Sorry for the goof.