Reader mail: Is Apple TV worth it?

Rita writes: I really do want to replace my cable, but it seems like such an effort and it might not even save me money. Is Apple TV worth it? The only shows my family watches are Dora the Explorer (for the kid), Daily Show (for me), MLB (for my husband).

Well, Rita, here’s my first question for you: Are those really the only TV shows you watch? Because as many shows as there are available on iTunes and Netflix, there are still an awful lot of gaps—particularly when it comes to live TV.

And here’s another thing: While cutting the cord with an Apple TV or another set-top box certainly can be a lot cheaper than a cable subscription, it’s not like all those Internet-streamed movies, TV shows, and sporting events are free.

Let’s start with your family’s favorite shows. Dora the Explorer is available on Netflix (which you can stream over Apple TV) if you happen to be a subscriber, while episodes of “The Daily Show” are available for purchase on iTunes. Even better, Apple TV and other competing set-top boxes come with an app for streaming Major League Baseball games.

Not bad, right? But before you get too excited, let’s break out a calculator and do a little addition.

First, the Apple TV itself, which sells for $99—not nothing, but relatively cheap all things considered, and it’s a one-time cost. Even cheaper is the $59 Roku HD, a small streaming set-top box that supports Netflix, Hulu Plus (the for-pay version of Hulu, the website that streams network TV shows for free), Amazon Instant Video (which boasts many of the same TV shows and movies as iTunes does), MLB.tv, NBA games and more. Other TV set-top boxes are also available, but some—like the $199 Boxee Box—are expensive, while others—like Sony’s $79 Netbox—don’t support MLB.tv, which sounds like a requirement in your living room.

(By the way: connecting a streaming-video box to your TV typically takes all of five minutes. In most cases, you just plug an HDMI cable from the video output in the back of the box to the input on the back panel of your HDTV; after that, a setup wizard will usually guide you through connecting the device to your home Wi-Fi network.) 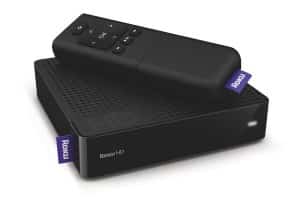 Next, we’ve got the subscriptions for your various streaming services. You can get a streaming-only subscription to Netflix for just $8 a month—quite a bargain, considering the tens of thousands of movies and TV shows available—while a season’s subscription to MLB.tv will set you back $80. If you want access to Hulu’s shows (which aren’t available on Apple TV, by the way), that’s another $8 a month. Now, if you forego Hulu, you could always buy shows (like “The Daily Show”) on iTunes à la carte—but they’ll run you $2 a piece, or $10 for a bucket of 16 episodes.

Add all that up (let’s assume that you chose Hulu Plus, which offers “The Daily Show” for $8 a month), and that comes out to a reasonable $16 a month, or about $30 during baseball season ($80 divided by six months = about $13.33). That brings your total cost for the year to about $270, give or take, compared to an annual cost of $864 for, say, digital cable and an HD DVR from Time Warner.

Now, even if those numbers work for you and you’re ready to cut the cord, there are still a few factors to consider before you snip.

While sporting events like the MLB and NBA basketball (assuming you’re ready to pay up for streaming professional hoops, of course) are often streamed live, other network TV shows—like, say, American Idol or Dancing with the Stars—are not. That means you’ll need an over-the-air antenna if you want to see who gets kicked off Idol along with the rest of the country. (And remember, unless you own a TiVo—which costs between $13 and $20 a month—you won’t have a DVR anymore, so no time-shifting.)

Also: does your husband watch ESPN? If he does, bad news: the main ESPN channels aren’t available online without a cable subscription—and since ESPN is a cable network, you can’t get it over the air.

So, Rita … where does that leave us? No question, if you have a standard TV antenna, an Apple TV or Roku, and subscriptions to Netflix, Hulu, and MLB, believe me—you’ll never be bored, and you could save hundreds of bucks a year by cutting the cord (well, the digital cable part of the cord, at least). Then again, I’d be lying if I told you there weren’t any compromises involved or hoops to jump through.

Did this help? Have more questions? (I’m sure you do, since I skipped over so many details.) Let me know!