Here we go again: Is Apple prepping its own TV set? 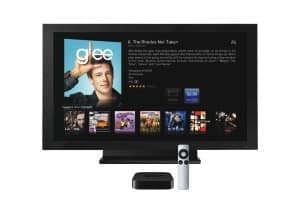 There's already an Apple TV set-top box, but what about an Apple television set?

One of the oldest Apple rumors around got a fresh shot in the arm Tuesday, with gadget site DailyTech claiming that an Apple-branded television may be in the works.

DailyTech’s source, an unnamed ex-Apple exec, boasts that Apple hopes to “blow Netflix and all those other guys away” with its own TV, which (supposedly) would be built by a third-party manufacturer and would come with built-in iTunes music and video streaming.

So, when might the rumored Apple TV—or maybe Apple HDTV, since the Apple TV name is already taken—arrive? Perhaps by this fall, or “late” this year, DailyTech says.

Well, perhaps, but here’s the thing about these Apple television rumors: they’ve been floating around for years, with various analysts, super-secret spies, and even Apple job postings hinting at a supposed Apple TV set beginning as early as 2009.

No less than Gene Munster, a well-known industry analyst with Piper Jaffray, has long been singing the Apple television tune—most recently back in January, when he predicted that Apple will “enter the TV market with a full focus, as an all-in-one Apple television could move the needle when connected TVs proliferate.”

But while Apple has had some success in the living room, namely with its $99 Apple TV set-top box for instant video streaming (read up on Apple TV here), it’s also seen its fair share of home-entertainment failures.

Remember the $349 iPod HiFi, which was basically an overpriced, glorified iPod speaker dock? Probably not—which is why I’m puzzled as to why Apple would jump into the TV business after getting burned with its home speaker.

All that said, your guess is as good as mine when it comes to Apple television. Who knows—maybe the world is ready for an Apple-branded TV with easy-to-use, iPhone-like menus and built-in iTunes.

Or is it? Tell us what you think.

Sources: DailyTech, via 9 to 5 Mac