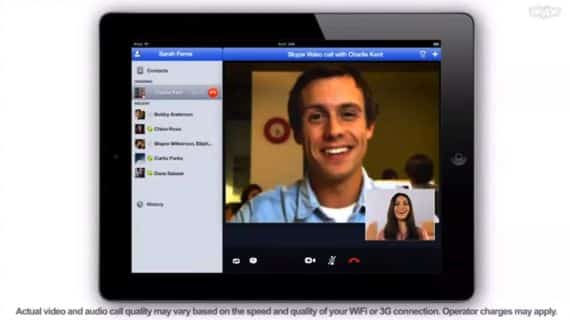 It’s been more than three months since the camera-packing iPad 2 arrived in stores … and here we are, still waiting for a full-on Skype app for iPad. Maybe not for much longer, though.

The Mac bloggers at RazorianFly claim that Skype just posted—and then abruptly yanked—a YouTube video promoting Skype for the iPad 2, complete with a demonstration of picture-in-picture video chat, a swipeable column of large, thumbnailed contacts, and a jumbo-sized dialer.

Update: A Skype rep just told The Unofficial Apple Weblog that yes—Skype for iPad is real, and CNET has a hands-on preview. Expect the iPad Skype app to arrive Tuesday in the App Store, CNET reports.

A RazorianFly reader managed to record his own (silent) video of the clip before it disappeared; you can check out below.

The iPad 2 already features voice chat thanks to Apple’s FaceTime software, but FaceTime is only available for iPad, the iPhone, and Mac users.

Skype on the iPad, however, would allow hundreds of millions of worldwide Skype users—many of whom are using Windows PCs—to video chat with their iPad 2-toting friends and family.

Also worth noting is the fine print at the bottom of the (purported) Skype video:

Actual video and audio call quality may vary based on the speed and quality of your Wi-Fi or 3G connection.

That sure sounds like Skype video calls on the iPad would work over cellular 3G connections. For now, FaceTime video chat only works over Wi-Fi. Interesting.

So, are you game for Skype on the iPad? Let us know!