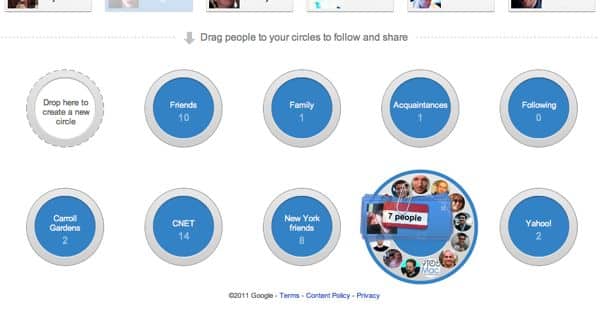 Just select the people you want to add, then drag them into the Google+ "circle" of your choice.

Probably the biggest question Google needed to answer about Google+, its ambitious new social network, isn’t “how” or “what,” but “why?”

Why would anyone want to add another social network to their lives when we’re already wasting hours a day on Facebook and (to a lesser extent) Twitter?

Well, the answer isn’t all that obvious until you’ve used Google+ for a bit—and indeed, the initial list of features (including virtual “hangouts” where you can video chat with entire groups of friends, instant photo and video uploads from your phone, and feeds of “highly contagious” topics to comment on) wasn’t initially all that awe-inspiring (or at least, it wasn’t to me).

As it turns out, though, the subtle yet powerful appeal of Google+ lies in how you add fellow Google+ members to your distinct social “circles.”

Instead of forcing you to deliberate whether to accept that random Facebook friend request from someone you met exactly once, Google+ lets you add near-strangers to your social network—but you can also banish them to a far-flung Google+ circle with little access to your personal updates or information.

So far, giving the barely two-week-old Google+ a test-drive hasn’t been all that easy. Entry into Google+ is by invitation only, and until just a few days ago, Google+ invites were scarce—and hot—commodities. The good news is that Google seems to have loosened its grip on Google+ invites, making them far easier to snag. (If you don’t have one yet, drop me a line and I’ll send you one.)

Still, all the chatter about Google+ “circles” feature is just academic until more people join Google+. Some unofficial estimates claim that about four million souls are signed up—not bad for just a week, but a drop in the bucket compared to Facebook’s mammoth, 750-million-member network.

Once you do manage to sign up (you’ll need a Google or Gmail account to get started), Google+ will present you with a wall of thumbnailed tiles, each representing a member. Beneath the tiles, you’ll see a row of four blue circles, marked “Friends, “Family,” “Acquaintances,” “Following,” and a fifth labeled “Drop here to create a new circle.” 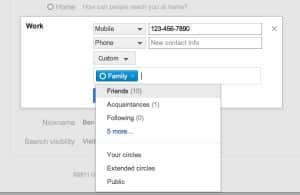 Google+ lets you share—or not—specific personal details with only the circles you choose.

Here’s where the fun begins. As opposed to Facebook, where adding a casual acquaintance puts them in the same bucket as your closest family and friends, Google+ immediately asks you to put (or rather, drag with your mouse) a new Google+ contact into one of your social “circles.”

Why is this such an important point? Because with Google+, there’s no agonizing about whether that person who’s trying to add you to their network is close enough to add to your friends list.

For example: That person you just met at a business conference, or at the store—you know, someone you might normally think twice about adding on Facebook? In Google+, you can just drag them into your “Acquaintances” circle rather than, say, your “Best friends forever” circle.

Also, these Google+ social “circles” aren’t just circles in name. Any updates you write, photos you post, or any other content you share with a circle stays within that circle, unless you specify otherwise. You can also specify which bits of personal trivia in your Google+ profile (including your resume, interests, relationship status, and phone number) get shared with a specific group—and which don’t.

Now, Facebook also allows you to create its own version of friend circles—although on Facebook, they’re called Groups, and when you add a friend to a group (like, say, “People I don’t know very well”), they’ll know about it.

In Google+, on the other hand, your contacts won’t know which of your circles you’ve added them to; instead, they only know that you’ve added them in one way or another, thus eliminating the possibility of hurt feelings by adding them to your “Can’t remember where I met them” circle.

Another difference between Google+ “circles” and Facebook Groups is that on Facebook, Groups are intended to act more like clubs—that is, you won’t see anything posted to a Facebook Group wall that wasn’t specifically intended for that particular group. If your Facebook friends don’t take to the Group you created for them, you’ll hear nothing from the Group but crickets.

Click a link to see updates only from a particular Google+ circle. (The updates pictured here are all public, by the way.)

With Google+, though, clicking on a particular circle filters out status updates in your Google+ news feed from anyone that isn’t a member of your circle. Click on your “Family” circle, for example, and you’ll only see updates from mom and dad, or your brothers and sisters. Click on your “Office mates” circle, and you’ll only see posts from folks in the office—even if they’re not even aware that you’ve relegated them all to their own circle in your Google+ network.

To be fair, Facebook also lets you filter your news feed using Friends Lists, which you may have to hunt around to find. Try clicking the “Friends” link below your profile picture, then click the “Manage Friend List” button at the top of the page; you’ll then see you lists (if you have any) in the left-hand column. Once you have some lists set up, return to your main profile, click the link next to “Top News” above your news feed (the link probably reads “Most Recent”), then scroll to the bottom of the drop-down menu and select a friend list by which to filter.

But Facebook’s friends lists are really only for filtering your news feed— Correction: Actually, you can share specific updates and personal information with individual friend lists in Facebook. It’s not nearly as seamless a process as in Google+; still, apologies for the oversight.

In other words, Google+’s social circles are more than just window dressing. They’re powerful sharing features that can (potentially, at least) ease your anxiety about whether to accept, reject, or ignore those incoming friend requests.

So, what do you think: Does the world need another social network? Like the idea of choosing “circles” for your friends? Need a Google+ invite? Let me know!