Seems like every time I open the Netflix streaming app on my iPhone, I get the same old recommendations, again and again—and for the record, no, I do not want to watch “Gamer,” “Step Up 3,” or “Bloodlust Zombies.”

And while I’m sure the silent-era “Nosferatu” is brilliant, I’m just not in the mood, OK? Stop making me feel guilty!

Indeed, poking around for instant Netflix movies on a smartphone, an Apple TV or Xbox 360 sometimes feels like browsing the aisles at a small, poorly stocked neighborhood video store—you know, the one where you keep seeing the same tired, dusty box covers, sitting exactly where they were the last time you looked.

It’s enough to make you rethink your $8-a-month subscription … and apparently, you wouldn’t be the only one. 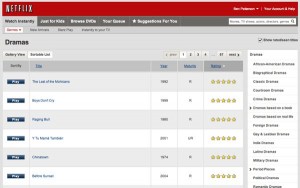 But here’s the thing: if you’re only looking through the limited categories of movies that Netflix thinks you want to watch—like “Dark Independent Movies” or “Dysfunctional-Family TV Shows” (guess that tells you something about what’s I’ve been watching on Netflix, right?)—you’re missing the gems that you actually will want to watch.

Read on for three easy ways to find a streaming Netflix movie that you’ll love, guaranteed.

1. Visit the Netflix website and start sorting
Go to Netflix.com on your browser (either on your desktop PC, or on your smartphone or tablet) and skip right past the main page, the one with all the gaudy cover art.

Instead, go ahead and pick a genre from the drop-down menu. On the following page—labeled, say, “Drama”—click the “See All Dramas” button in the top-right corner. Still with me? Now, under the title of the next page (“Drama” again, in this example), click the “Sortable List” tab.

At last, you can sort—by title, year, MPAA rating (such as “G,” “PG,” “R” or “NR” for “not rated”), or best of all, by star rating. Remember, the more star ratings you’ve assigned to movies you’ve watched on Netflix, the better the ratings will reflect your individual taste.

2. See it again, Sam
Want to settle in with a movie you know you’re going to love, because you’ve seen it already? While browsing through a sortable list of instant Netflix movies, check the “Show rated/seen titles” box in the top-right corner of the screen. Doing so, in my case, revealed some of my favorite movies ever, like “Raging Bull,” “Chinatown,” “Before Sunset,” and “Speed.” (Hey, no snickering on that last one.)

3. Dig deep with InstantWatcher
I’ve sung the praises of InstantWatcher in the past, but it’s such an indispensable tool for plumbing the depths of Netflix’s instant collection that it’s worth mentioning again.

A site that’s run independently of Netflix, InstantWatcher lets you slice and dice Netflix’s streaming catalog in dozens of different, clever ways. You can scour the latest picks of the New York Times movie critics, tour foreign films country-by-country, get listings of movies that have English subtitles available, or find out which titles have just arrived on Netflix—and which are about to disappear.