What to expect during Wednesday’s nationwide Emergency Alert System test 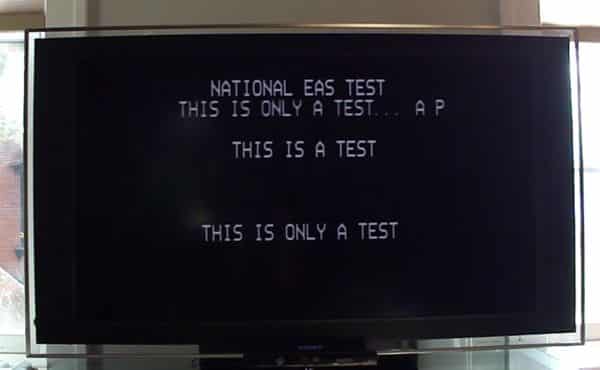 Don’t be alarmed Wednesday afternoon (or morning, on the West Coast) if your favorite show is abruptly interrupted by a blaring tone and a crawl at the bottom of the screen that reads, “A Primary Entry Point station has issued an Emergency Action Notification…”

Yes, it’s a test, and only a test of the Emergency Alert System, the successor to the old Emergency Broadcast System that those of a certain age (myself included) may remember well.

Two years in the making, the first-ever nationwide EAS test is slated to begin at 2 p.m. sharp Eastern Time (or 11 a.m. Pacific) on Wednesday, November 9, and it’ll last about 30 seconds.

The test will look familiar to anyone who’s ever seen a severe weather alert, like for a tornado or an approaching hurricane. The Emergency Alert System is also used to warn TV viewers about nearby child abductions.

But while local TV and radio stations conduct regular EAS drills, Wednesday will mark the first “end-to-end” test of the system, which could potentially be used to warn large regions or the entire nation of disasters like earthquakes, tsunamis, or even a terrorist attack.

So, what will happen during the test? Well, what you’ll see and hear will vary depending on the plans of your local TV and radio stations, according to the Federal Communications Commission.

Two things you can count on. At 2 p.m. ET, television and radio programming will be interrupted by a series of jarring emergency tones, while a crawl at the bottom of your TV screen will something along the lines of:

You’ll also hear an audio message that says, “This is a test.”

That’s why the agency is urging local stations to broadcast a “separate visual element” (like an overlay or a banner) about the test for deaf or hard-of-hearing viewers.

Update (11/9/11): Well, the test just happened, and here in New York, the message did read “This is a test.” What happened in your area? Let us know in the comments below.

And here’s how the test looked and sounded on Time Warner Cable in New York:

Correction: The EAS test will take place at 11 a.m. PT Wednesday, not 10 a.m. as I originally (and mistakenly) wrote. Sorry about that.