Want to try a wireless body scale, a floor-sweeping Roomba, or even the iPad 2 at home without plunking down the full retail price? A new, online shopping site lets you do just that, provided you’re willing to fork over $25 a month.

Billing itself as an online “try-before-you-buy destination” for the latest a greatest gadgets, Ybuy has been around for a few months but is only now emerging from public beta, according to TechCrunch.

The premise is simple, and somewhat enticing. Once you sign up, Ybuy will send you a gadget a month, along with a prepaid return shipping label. (And yes, shipping is free both ways.) 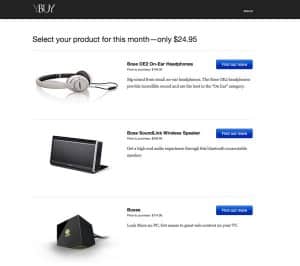 Ybuy's catalog of try-before-you-buy gadgets is small, but enticing.

After 30 days of tinkering with your monthly Ybuy gadget, you have two options: either a) clean it, pack it up, slap the shipping label onto the box and hand it over to UPS, or b) keep it and pay the standard retail price, minus your monthly $25 Ybuy subscription fee.

If the system sounds familiar, you might be thinking of Netflix’s movies-by-mail subscriptions—except with Ybuy, you’re getting gadgets rather than discs, and you can’t keep the loaned gadgets indefinitely.

Also, the number of items in Ybuy’s try-before-you-buy catalog is on the small side—just 30, to be exact.

That said, we’re talking some pretty enticing gear here, including the iPad 2, the new Kindle Fire tablet, the Xbox 360 game console and its motion-sensing “Kinect” camera, the Roomba 562 “Pet Series” floor-sweeping robot, the Wi-Fi-enabled, Facebook- and Twitter-friendly Body Scale by Withings, the gorgeous Jawbone Jambox wireless speaker, and a Sous Vide water oven. Sorry, no phones—or at least, not yet.

For its part, Ybuy claims it has a “team of specialists, product testers, and tastemakers” who determine which “best-in-class” gadgets to offer to members. And hey—if you’re not feeling inspired, you can always opt out for a month, or cancel your membership. (Members pay their dues monthly, by the way, rather than in an annual lump sum as I’d initially suspected.)

All in all, very interesting—and so far, I’m having a hard time finding any deal-breaking ifs, ands, or buts. The one caveat is that for now, Ybuy is still invite-only; you’ll be prompted to request an invitation the first time you visit the site. (I’m still waiting for an invite myself.)

It’ll also be interesting to see whether certain items in Ybuy’s catalog—like, say, the iPad 2 or the Roomba—end up with a long waiting list.

So, what do you think: would you cough up $25 a month to try the latest gadgets at home?