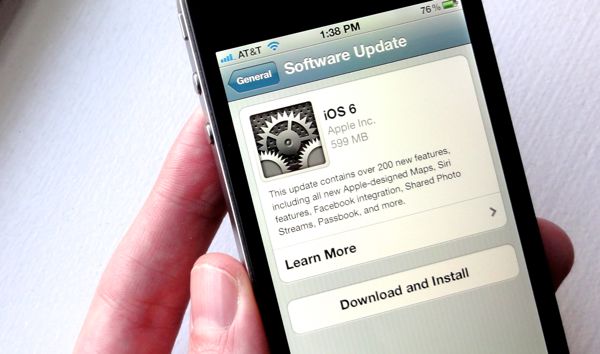 Even if you’re not trading up for the iPhone 5, you can still make your old iPhone (or iPad, for that matter) new again by installing Apple’s iOS 6 software update onto your handset.

Update: Looking for tips on installing iOS 7 to your iPhone, iPad, or iPod Touch? Click here!

Apple just pushed the iOS 6 update live on its servers, and you can install it on your iPhone or iPad wirelessly, in just a few taps.

Why bother with the upgrade? Well, I can tick off at least seven nifty new features right here, including turn-by-turn car navigation through the new Maps app, full-screen web surfing, a “do not disturb” mode for calls and alerts, the ability to decline a call with a text message, easier Photo Stream sharing, and more.

A red badge should appear on your iPhone’s (or iPad’s) Settings app once iOS 6 is available to download. After that, all you’ll have to do it tap the “Download and Install” button, and your device will take care of the rest.

That said, there are a few things you should do before updating iOS on your iPhone or iPad to the latest and greatest version, starting with…

Apple recently issued a new version of iTunes to go along with iOS 6, and while there’s nothing earth-shatteringly new about the update, iTunes 10.7 is designed to play nice with iPhones and iPads running the iOS 6 software update.

Given that, it’s probably a good idea to update your copy of iTunes before taking the iOS 6 leap. Here’s how to do it.

For iTunes on a Mac:

For iTunes on a PC:

2. Back up your iPhone/iPad

The process of updating an iPhone or iPad is usually a smooth one, although snafus have been known to happen—particularly last year, with the rocky release of iOS 5.

Indeed, a stalled iPhone/iPad update could freeze your device or corrupt its data, including your photos, contacts, music and apps.

That’s why it’s critical you back up your iDevice before beginning the iOS 6 installation process. Here’s how:

If you’re using Apple’s free iCloud service on your iPhone or iPad and you have iCloud backups enabled, your device should be backing itself up automatically whenever its locked and connected to a Wi-Fi network. 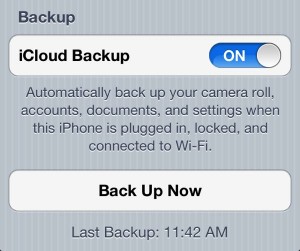 It’s a good idea to check the date of your most recent iCloud backup before installing iOS 6 on your iPhone or iPad.

Nice, but it’s still a good idea to check the date on your most recent iCloud backup—and if the backup file is more than a few days old, you should probably perform a manual backup before proceeding.

Still syncing your iPad or iPhone with iTunes? If so, iTunes creates a backup of your iDevice with each and every sync, and it’s worth it to perform one last backup before installing iOS 6.

3. Plug your iPhone or iPad into a power source

One thing you definitely don’t want to happen during the iOS 6 update process is have your iPhone or iPad run out of juice midway through the installation; it’s a sure-fire way to corrupt your device’s data, or worse.

With that in mind, make sure to plus your iPhone or iPad into a wall outlet using its power adapter or connect it to a powered USB port on your PC or Mac before you install iOS 6. Better safe than sorry, right?

Whenever there’s a major new iOS update available for download, a stampede of eager iPhone and iPad users tends to slow Apple’s servers to a crawl—and when that happens, downloads that normally take minutes could take an hour or more. 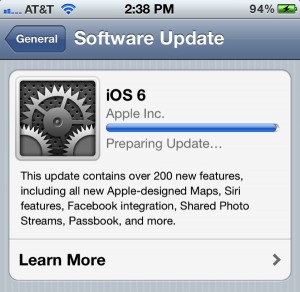 Relax: you’re not the only one staring impatiently at the “Preparing Update” message.

Also, the actual installation process may take a good 30 minutes-plus, after the initial download.

And if you find yourself staring impatiently at a seemingly endless “Preparing Update…” message while iOS 6 is busy installing itself on your iPhone or iPad, relax—you’re not the only one. (For the record, it took about half an hour for my iPhone 4 to move past the “Preparing Update” step.)

All told, it took nearly an hour and a half to update my iPhone to iOS 6, so make sure to set aside at least that much time before taking the plunge yourself.

My advice: be patient if the iOS 6 download and installation process takes longer than expected—and whatever you do, don’t interrupt it in mid-stream.

And if you’re willing to live with iOS 5 for a little while longer, consider waiting a day or so before pulling the trigger on iOS 6.

You can check for the iOS 6 update manually on your iPhone or iPad by tapping Settings, General, Software Update.