iOS 6 tip: How to launch iPhone-friendly Street View in Google Maps for Safari 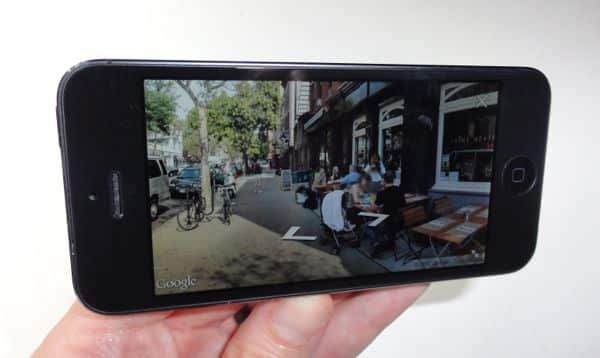 Annoyed by Apple’s new, infamously spotty Maps app for the iPhone and iPad? Sure, you can still access Google Maps on the mobile web with Safari, but the mobile version of Google Maps lacked a key feature: Street View, a swipeable, sidewalk-level 360-degree panorama covering locations in more than 40 countries.

Well, good news: Street View just landed on the mobile-friendly version of Google Maps, and it works just fine on the iPhone, iPad, and iPod Touch.

Update [12/13/12]: And here’s even better news: Google Maps with Street View is now available in the App Store.

You can launch Google Maps by clicking on this link on your iPhone or iPad. Once Google Maps loads, search on an address and then tap its “pin” on the map, or tap on any labeled business or landmark.

Just tap the third button in the bottom-right corner of the screen to launch Street View in the iPhone’s Safari browser.

When you do, a little white ribbon should appear along the bottom of the screen, complete with the name and details on the location you tapped and one, two, or three buttons to the right.

The button with the arrow is for turn-by-turn directions, while an icon with the phone handset will appear if there’s a phone number to dial.

And if you’re lucky, you’ll see a third button stamped with a little human figure—and yes, that’s the Street View button. (If you don’t see a Street View button, that’s probably because the location you tapped hasn’t been shot by Google’s roaming army of Street View cars yet.)

Tap it, and a new tab will launch in Safari, complete with a 360-degree image of the street. Swipe left, right, up or down to pan the image, or tap one of the white arrows to take a virtual stroll down the lane.

Street View looks particularly striking in “landscape” mode on the iPhone, especially if you turn on Safari’s new full-screen mode. (Tap the arrows in the bottom-right corner of Safari to go the full-screen way.)

Unfortunately, Street View on Safari won’t let you double-tap to zoom in as you could on the iPhone’s old Google-powered Maps app, or as you can right now on Google Maps for Android.

Still, though, Google Maps with Street view on Safari should be able to tide us over until Google comes out with a full-fledged Google Maps app for iPhone/iPad—sooner rather than later, I hope.

Rather use Street View in an app than on Safari? There are a few options available, although none of them are from Google yet. Click here for more details.