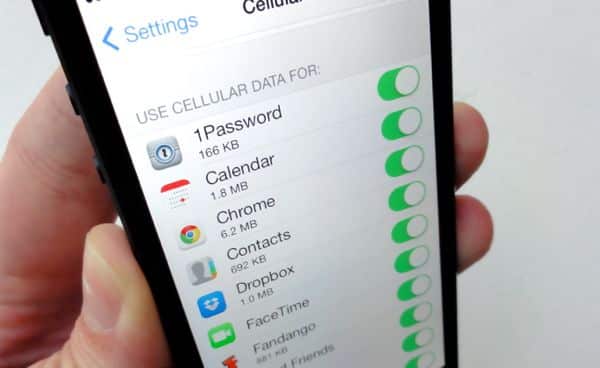 Surprised that your iPhone or iPad is burning through your monthly data allowance so quickly? Streaming too many videos or songs via, say, Netflix or Pandora could be the culprit, but maybe there’s another iOS app that’s siphoning off your precious (and expensive) cellular data.

Well, good news: one of the handiest features in Apple’s just-released iOS 7 update for iPhone and iPad is a detailed list of which apps are using the most 3G or 4G mobile data.

Even better, you’ll get the option to close the cellular spigot on specific data-hogging apps.

Let’s give it a try…

Of course, keep in mind that a data-hogging iOS app that’s restricted from using 3G or 4G data won’t be able to access the Internet when you’re out of Wi-Fi range.

Is your iPhone or iPad still using cellular data at a furious rate? If so, consider turning off mobile data usage for iTunes Match and Radio, as well as for iOS 7’s new auto-update feature for apps.

To do so, tap Settings, iTunes & App Store, then switch the Use Cellular Data setting to “Off.”

Still have more iOS 7 questions? Post ’em below, or send me an email.