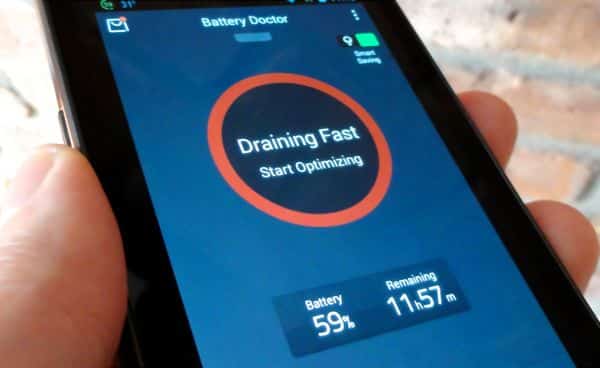 So, the battery in my Android phone was sitting at a decent 59-percent capacity, but it was draining at a steady clip; indeed, I had less than 12 hours left before it went kaput.

In a few taps, though, I learned that I could squeeze another two hours of life out of the battery by setting my Galaxy Nexus’s screen brightness to “auto” (no problem) and changing the screen “timeout” setting to one minute (easily done).

And if I were willing to quit a bunch of apps that were running in the background (several of which I didn’t even know were still chugging away) and turn off GPS, I could get yet another two hours of battery life, for a grand total of four extra hours. 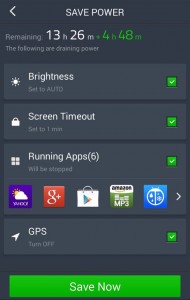 Battery Doctor can offer up battery-saving suggestions on settings to change and apps to close; you can pick and choose which suggestions you take, of course.

The tips came courtesy of Battery Doctor, a free app that sits on your Android phone/tablet and keeps an eye out for anything that’s putting too much strain on your battery.

Once you’ve got Battery Doctor installed, the app will appraise your handset’s power usage and give you a list of battery-saving suggestions.

At the bottom of the list is a big, green “Save Now” button; tap the button, and Battery Doctor will do all the work for you, from tweaking settings to closing power-hungry apps.

You can also pick and choose which settings to change and which apps to quit before tapping the Save Now button.

The app boasts a series of customizable power-saving modes, including a “Super Saving” mode that dims the screen and turns off almost everything except phone calls, text messages, and Wi-Fi—handy for when your Android phone’s battery is running on fumes.

You can even set Battery Doctor to automatically quit any running apps the moment you put your phone to sleep, while a “Task Killer” home-screen widget will do the same thing at the tap of a button. (You can “whitelist” any apps that you’d like to keep running, no matter what.)

Want to give Battery Doctor a try? You can grab it here from the Google Play Store.

Note: The makers of Battery Doctor haven’t compensated me in any way for this article.