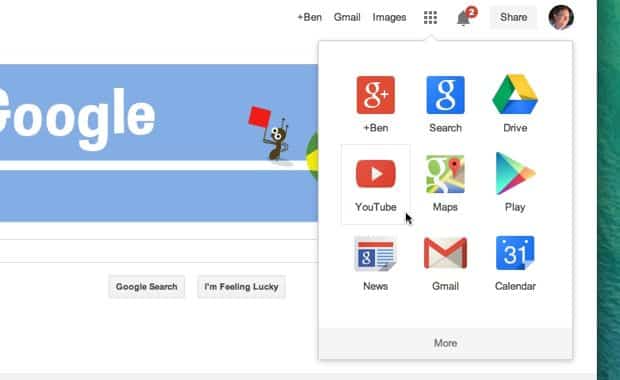 Ever wonder what happened to all the handy shortcuts at the top of Google.com with links to Google Maps, YouTube, Calendar, and the like?

Well, they got consolidated into something called the “app launcher”: a pop-up panel of popular Google features, everything from Google Drive and Maps to News and Wallet.

Want to rearrange the icons in the Google app launcher? Just drag and drop.

You can open the launcher by clicking the grid of nine little dots in the top-right corner of most Google pages.

When you do, you’ll see the default set of “apps” displayed by the launcher, including Google+, Search, Drive, YouTube, Maps, and Gmail. Click an icon, and off you go.

Scroll down to see more Google apps, such as Translate, Books, Wallet, and Shopping.

Don’t like the order of apps in the launcher? Just click, hold, and drag an icon, then go ahead and start rearranging.

Last but not least, you can add a missing Google feature—like, say, Google Helpouts or Groups—to the launcher by navigating to its page, clicking the app launcher icon, and then clicking the “Add a shortcut” button.

Note: Unfortunately, the “Add a shortcut” button won’t appear for some Google sites. Go to Google Scholar, for example, and the app launcher icon doesn’t appear at all.