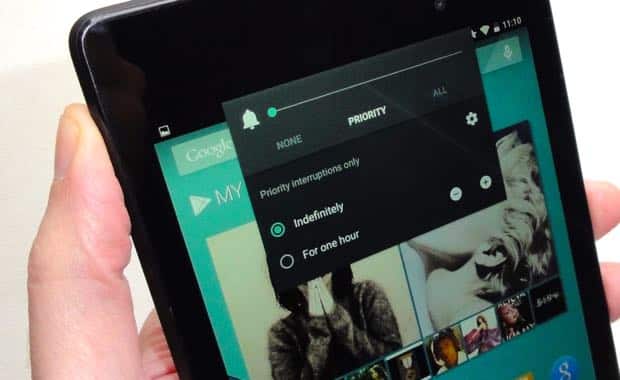 The latest version of Android—version 5.0, a.k.a. “Lollipop”—is taking its sweet time making it to Android phones and tablets. My Nexus 7 Android tablet only got the update a few weeks ago, and my newish Motorola G is still waiting for its own flavor of Lollipop.

That said, Lollipop is worth the wait thanks to a bevy of flashy new features, particularly one that’s quite overdue: “Priority” mode, which gives Android phones and tablets something akin to iOS’s “Do Not Disturb” feature. 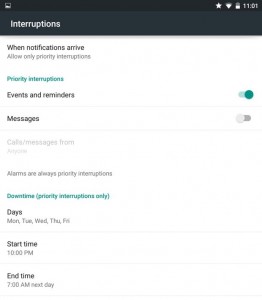 Lollipop’s “Priority” mode finally brings some of the best features from third-party “do not disturb” apps—such as quiet times and lists of “priority” callers—to the standard Android operating system.

Up until the arrival of Lollipop, there were only a couple of ways to silence your rings, beeps, and other Android notifications.

One was to double-click the volume-down button, which enabled the simple but relatively effective “silent” mode. I say “relatively” effective because the Android alarm clock has a habit of overriding silent mode unless you tweak a setting within an individual alarm. There’s also no way to put silent mode on a schedule—such as say, from 10 p.m. to 6 a.m. each day.

The other method for keeping your Android device quiet was was to find a third-party “do not disturb”-type apps in the Google Play store, but they’re of wildly varying quality and effectiveness; you can find some of my recommendations in this PCWorld article.

Lollipop’s “Priority” mode finally brings some of the best features from third-party “do not disturb” apps—such as quiet times and lists of “priority” callers—to the standard Android operating system.

Just double-click the volume-down button, and a pop-up window with a volume slider and three options will appear: None, which silences all your Android alerts, including alarms; Priority, which lets certain notifications and callers through, depending on your own custom settings; and All, which enables all your alerts.

Tap the Settings icon from “Priority” mode to pick and choose which alerts will get through during quiet time; for example, whether messages warrant an alert, which callers make the cut, and whether you’d like a regular “downtime” schedule.

You can also activate Priority mode and set it to turn off automatically after, say, an hour or two—a handy feature that’s missing in iOS’s “Do Not Disturb” mode, which I occasionally turn on during the day but forget to switch it back off.

All in all, pretty nice—but again, you’ll have to be patient until your particular Android phone or tablet gets the big Lollipop update. Here’s a recent Digital Trends article that details which makes and models of Android devices are next in line.