One of the more infuriating aspects of new, ultra-minimalist look of iOS is that all too often, the on-screen buttons are practically invisible.

Take Apple’s redesigned Music app, for example. When you open it and tap the “My Music” tab, you’ll see a scrolling list of all the artists represented in your music library. But what if you want to see a list of albums instead? There’s no album tab, nor any other obvious button for sorting through your tunes. 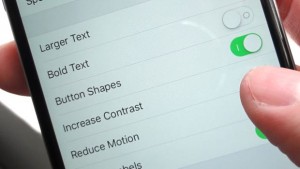 Look harder, though, and you might see the teeny tiny down-arrow next to “Artists.” Yes, that’s right—the subtle “Artists” heading is, in fact, a button, and tapping it lets you switch to “Albums,” “Songs” “Genres,” and so on.

If you miss the old days when the on-screen buttons on your iPhone and iPad actually looked like buttons, there’s a setting that’ll make iOS 9’s barely-there buttons easier to spot.

Tap Settings, General, Accessibility, then scroll down a bit and switch on the “Button Shapes” setting. 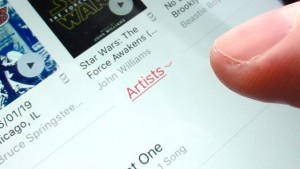 Now it’s a bit easier to tell that the “Artists” heading in the Music app is, in fact, a button.

Now, go back to the Music app and you’ll see that the “Artists” heading is now underlined, while navigational buttons like “Back” in the corner of the screen are surrounded by gray, button-like outlines.

No, it’s not a return to those big, tactile-looking iPhone buttons of yesteryear, but the “Button Shapes” setting is certainly better than fruitlessly pecking your way through one button-less screen after another.