Reader mail: How much should I spend on an HDMI cable? 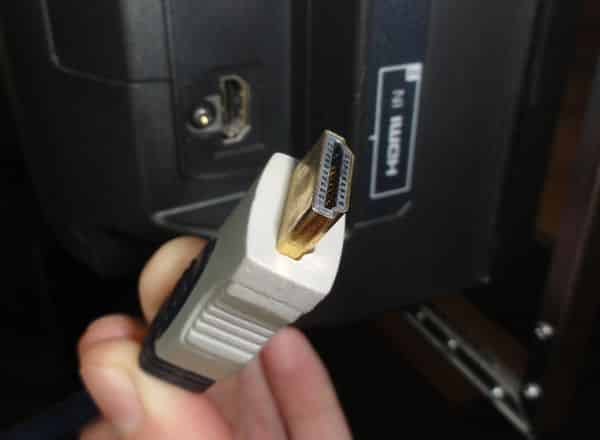 Andrea writes: I’m about to buy my first big flat-screen TV (finally) and a Blu-ray player, but I have a question about the HDMI cable that connects the Blu-ray to the TV set. How much do I need to spend on it? The guy at the store keeps trying to sell me a $100 HDMI cable with gold plugs, but that sounds awfully expensive to me. Help!

Hi Andrea, thanks for reading! And yes, you’re right: there’s no need to spend a hundred bucks on an HDMI cable that’s all of six feet long.

Now, don’t get me wrong; there are scenarios where an HDMI cable with quadruple shielding and gold-plated connectors will come in handy. But they typically involve distances greater than 15 or 20 feet, where factors like signal loss and interference may start to creep in.

You'll find one or more HDMI inputs on the back of your TV, or even on the side, as in this case.

In your case, though, I’m guessing your Blu-ray player will be sitting right next to your HDTV—and unless you’re a seriously obsessive videophile intent on scouring the picture with a microscope, just about any six-foot, garden-variety HDMI cable will do. (The video experts at Gizmodo ran a series of HDMI tests a few years back and came to pretty much the same conclusion.)

How much should you pay? Well, let me put it this way: I’ve never spent more than $10 on an HDMI cable, and I’m very happy with the picture quality on my 46-inch HDTV.

And where can you buy a cheap HDMI cable? Unfortunately, it’s very possible that your big-box store won’t stock bargain cables, probably because they’d rather sell you the expensive kind.

Instead, try an online retailer like Amazon (which sells six-foot HDMI cables for as little as $2 or $3), Monoprice (which specializes in home video equipment) and Blue Jeans Cable (ditto).

Confused about what kind of HDMI cable to get? For your typical HDTV sets, Blu-ray players, and streaming-video boxes (like Apple TV and Roku), you’ll need an HDMI cable with male-to-male Type A (that is, standard) connectors.

HDMI cables also come labeled with specification numbers, the most common being 1.3. An HDMI 1.3 cable will handle pretty much anything your Blu-ray player or streaming-video box can throw at it, including high-quality “lossless” audio formats (like Dolby TrueHD and DTS-HD Master Audio—and if you don’t know what lossless audio is, well … don’t worry about it for now) and even 3D video.

Have more questions about HDMI, or home video in general? Let me know!