Reminder: Avoid those “Who viewed me?” apps on Facebook 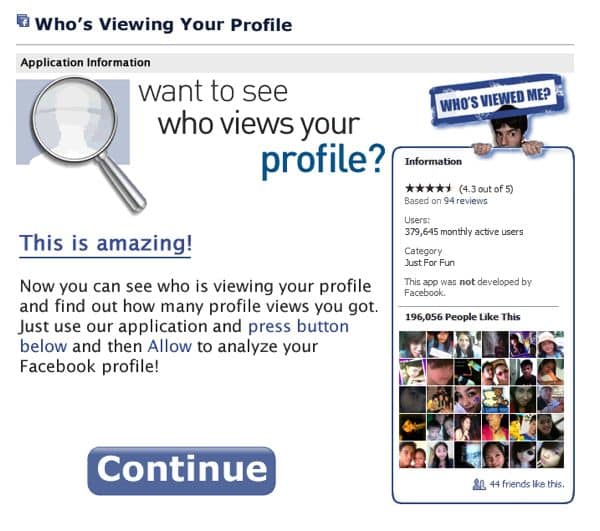 Don't be fooled by these bogus "Who viewed me?" apps on Facebook.

Sure, it’s tempting to find out who’s been pouring over your profile page on Facebook. But here’s the thing: it can’t be done, and any Facebook app that promises otherwise is trying to scam you.

There’s nothing all that new about the whole “see who’s been viewing your profile!” trick on Facebook, yet hardly a day goes by when I don’t see yet another unknowing Facebook user fall for it—and in the most public of ways.

First, let’s get straight to the facts. A quick look at Facebook’s privacy policy reveals the truth about finding out who’s viewing your profile:

Yet a quick search reveals more than a dozen apps that claim to do just that, and as quickly as one phone “Who’s viewed me?” app gets zapped off of Facebook, another takes its place.

So, what happens if you install one of these apps on your accounts? For starters, you may have granted the app access to your public Facebook information, such as your name, your profile picture, and your list of friends (assuming you’ve made your friends list public)—not too terrible, given that your public Facebook info is, by definition, already public.

But some fake profile-viewing apps also request additional access, such as permission to post to your Facebook wall—meaning that the moment you install the app, it will likely spam all your Facebook friends with a message like “OMG, it works, I can see who viewed my Facebook profile!” That’s the moment when saavy Facebook users will know that the “Who viewed me?” scam has claimed yet another victim.

So, what should you do the next time you run across a “Who viewed me?” app? First of all, don’t install it. Second, click the “Report App” link in the left-hand column of the app’s “about” page. And third: Spread the word that any app that promises to let you see who’s been viewing your profile is not to be trusted.