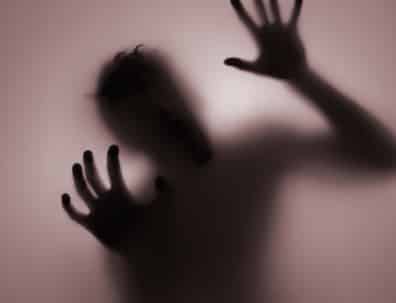 Hey, who goes there? Maybe it’s nothing—or maybe it’s the stealthy sound of someone tagging you in a Facebook photo, or a hacker sneaking into your account, or a rogue app having its horrifying way with your Facebook wall.

Read on for five terrifying Facebook tales, plus tips for avoiding them … if you dare.

Nightmare #1: The Tag of Terror
You’re having an innocent cocktail at the office Halloween party, when suddenly a fiendish trickster puts a lampshade on your head—and someone snaps a picture at that exact, fateful moment. The next thing you know, the incriminating photo is up on your Facebook wall, tagged with your name, and a flurry of cruel comments are piling up—including a testy one from your boss.

Avoid it by: turning on Facebook’s “Profile Review” feature. It won’t stop people from tagging embarassing photos of you on Facebook, but at least you’ll be able to block ’em before they appear on your wall.

Nightmare #2: The “Who Viewed Me?” App That Wasn’t
You’ve always been curious to find out who’s been peeking at your Facebook profile, and then you finally find an app that promises to satisfy your curiosity. You sign up and wait … but the hoped-for list of ex’s, secret admirers, and other profile snoopers never materializes.

Puzzled, you click on your profile—only to find that it’s been spammed by the two-faced app, which is now advertising its phony wares in your name. Ahhhhhh!!!

Avoid it by: remembering that Facebook doesn’t allow members to see who’s been viewing their profiles—and that any app that says otherwise is lying to you.

Nightmare #3: The Comment That Blew Up in Your Face
Your friend posted a hilarious photo—well, you thought it was hilarious, anyway—of a cat curled up in a sink, and you added a lighthearted comment about turning on the faucet. Suddenly, you’re blindsided by a furious army of cat lovers, most of whom you’ve never heard even of. How did an innocent joke between friends turn into an international incident?

Avoid it by: Don’t comment on a post before checking out its privacy settings first. If there’s a little globe next to the time stamp of a friend’s post, that means the update is being shared with everyone on Facebook—and that includes any comments, too.

Nightmare #4: The Day the Music Stopped
You just got hip to Spotify, the magical music service that lets you listen to streaming tunes for free, and the only price of admission was connecting Spotify to your Facebook account.

One fine day, you’re in an ABBA kind of mood, and you just can’t stop the music—that is, until you start getting lip from your Facebook frenemies. You click through to your profile … and a shiver runs up your spine. Turns out that Spotify’s been posting all your ABBA activity to your Facebook wall, much to the hilarity of your online pals.

Avoid it by: activating Spotify’s “Private Listening” mode from the main Spotify menu, which will temporarily keep Spotify from posting your recently played tracks on Facebook. Want to stop Spotify from revealing your musical tastes forever and ever? Just change its permission settings; here’s how.

Nightmare #5: Attack of the Facebook Account Hacker
Another day, another chance to see what’s happeening on Facebook—except when you try to log in, Facebook says that your login information is invalid. Confused, you request a new password via email … only the email never comes. Only after checking with a friend do you learn the horrible truth: someone has broken into your Facebook account and is masquerading as you, leaving a trail of spammy status updates in their wake.

Avoid it by: turning in the “Login Approvals” feature, which requires that you enter a security code sent via SMS whenever you or someone tries to log on to your account using an unrecognized computer or device. To do so, click the little arrow in the upper-right corner of any Facebook page, select Account Settings, click the Security tab in the left column, then open the “Login Approvals” section and click the checkbox.

Already living the nightmare of a hacked account? You can always try recovering it; here’s how.