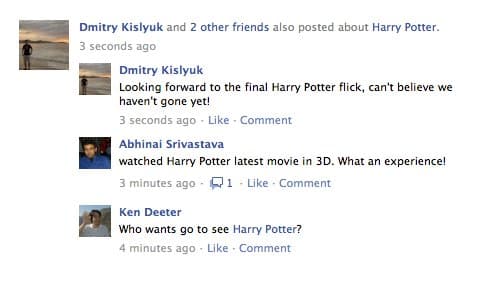 Noticed that status updates from your Facebook friends are looking a little more jumbled than usual? Maybe it’s because of a just-added Facebook feature that groups status updates in your news feed by topic—a change that’s raised the hackles of more than a few Facebook users.

Facebook announced the new grouping feature Monday afternoon, with All Facebook noting that the rejiggered news feed items were appearing “across the site” Tuesday.

So, what’s going on exactly? Now when you post an update on the same topic as another friend (say, about the Philadelphia Eagles, or Newt Gingrich’s presidential hopes), your post may appear grouped together with similar updates—handy if you want to see Facebook news items grouped by subject, but not so great if you yearn for the good old days of having status updates listed in chronological order.

What’s the idea behind the change? As Facebook puts it:

We want to show you the most relevant and interesting information, and this test is designed to show you trends among what your friends are saying.

I’ve already seen a few items in my own news feed grouped together, including several updates about President Obama and a few others about Google+. And in case you’re wondering, yes—the groupings appear in both the “Top News” and “Most Recent” news feed modes.

Naturally, most of the nearly 3,000 comments on the announcement are of the “hate it!” variety. “I want my chronological timeline back, and not this clumpy mess,” one user complained, with another sniping that the new grouping feature is “completely worthless and annoying.”

That said, a few Facebookers stuck up for the social network. “Why does everybody hate on every new thing they do,” wrote one Facebook defender. “It’s called innovation people, get with the times.”

So, have you noticed any updates grouped together in your Facebook News Feed? And if so … like, or dislike?