In-flight smartphone use: “Airplane” mode or completely off during takeoff and landing? 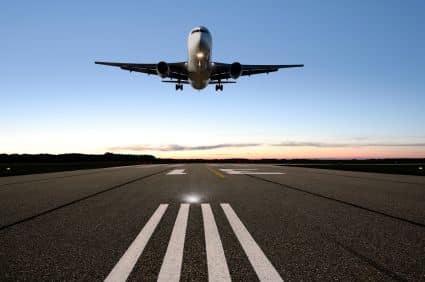 Jason writes: Is it OK to just put my smartphone in “airplane” mode on a plane when it’s taking off and landing, or do I have to turn it all the way off like the flight attendants say?

Hi Jason! Anyone who flies the friendly skies on a regular basis knows the drill: the aircraft door closes, and the flight attendants start going up and down the aisles, telling everyone to turn off all portable electronic devices for takeoff. And when it’s time to descend, once again—turn everything off, please.

But as those of us with smartphones and tablets know, there’s all the way off, and then there’s … well, mostly off.

“Mostly off” means putting your phone or tablet into “airplane mode,” which cuts off all two way wireless communications, such as cellular receivers, Bluetooth, and Wi-Fi. Then you’d just the “sleep” button to turn off the screen—all the better for snapping it back on the moment you’re at cruising altitude, or once the landing gear bounces onto the tarmac.

For the past few years, I’d figured that “mostly off” was good enough for takeoff and landing; after all, my iPhone’s wireless signals were safely cut off, and I rationalized that my snoozing (but still powered-up) handset couldn’t actually interfere with the plane’s navigation systems.

On a recent American Airlines flight, though, the flight attendants had a new warning: turn off all your gadgets for takeoff, and no—just putting your phone into “airplane” mode doesn’t count.

I grudgingly complied, turning both my iPhone and my iPad completely off, but only after promising myself that I’d do a little research once my feet were back on terra firma.

So, what’s the deal?

The Federal Aviation Administration gives the airlines a fair amount of latitude (sorry for the pun) when it comes to the use of portable gadgets at cruising altitude—and indeed, items like MP3 players, laptops, and smartphones switched to “airplane” mode are A-OK with the FAA, although specific airlines can “individually determine” exactly when and if you can start futzing around with your laptop, iPad, or Kindle.

But what about during takeoff and landing? Here’s the FAA’s position, as of 2009:

The FAA has issued guidance to airlines letting passengers turn on most PEDs after the plane reaches 10,000 feet. At a lower altitude, any potential interference could be more of a safety hazard as the cockpit crew focuses on critical arrival and departure duties.

Why the special rules for takeoff and landing? Well, as retired airline captain John Cox puts it in his USA Today column:

Almost all landings of airliners use the Instrument Landing Systems (ILS) for vertical and later alignment with the runway. Even during good weather, the pilots tune the ILS for navigation information. Sensitivity increases closer to the runway. This means even a slight amount of interference by a device could be significant during an ILS approach near the runway. Being conservative is justified with the electronic ban below 10,000. Maybe one day the manufacturers will be able to certify electronics to be “airplane friendly,” but until then we should turn them off below 10,000 feet.

OK, but do portable gadgets like smartphones really pose a threat to the navigation systems in airplanes? Depends on who you ask, although some sobering studies point to dozens of mid-air “incidents” that may indeed be linked to portable gadgets.

Here’s a scary sampling from one particular report, courtesy of ABC News:

“Auto pilot was engaged,” reads one. “At about 4500 ft, the autopilot disengaged by itself and the associated warnings/indications came on. [Flight attendants] were immediately advised to look out for PAX [passengers] operating electronic devices. … [Attendants] reported that there were 4 PAX operated electronic devices (1 handphone and 3 iPods).” The crew used the public address system to advise the passengers to shut off electronic devices “for their safety and the safety of the flight,” after which the aircraft proceeded “without any further incident.”

Now, just to be clear, aviation experts haven’t found any conclusive links between portable gadgets and airline crashes … or at least, not yet.

But when it comes to hurtling through the air in a big metal tube, taking a “better safe than sorry” approach sounds reasonable to me—particularly when we’re only talking about being without the use of your smartphone for a scant five or ten minutes at the beginning and end of a flight.

So, Jason, back to your original question: go ahead and turn your smartphone off—completely off—during takeoff and landing. And from now on, I will, too.