Video review: A wireless security tether for your wayward iPhone 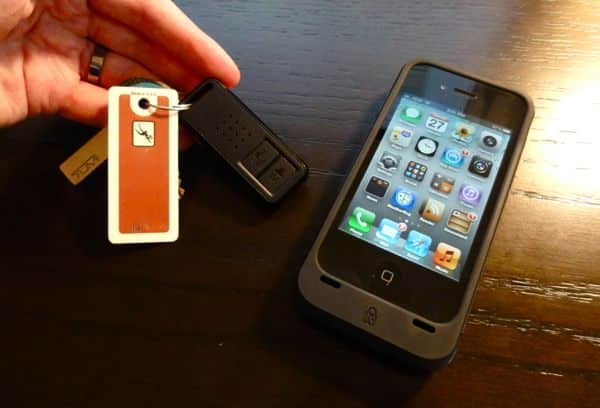 Ever have nightmares of leaving your iPhone in a taxi cab or at a crowded Starbucks—or even worse, that a thief might sneak it out of your pocket? Me too.

Enter Kensington and its BungeeAir Power, a $99 mobile security system that includes a key fob that’s wirelessly connected to an iPhone 4 case.

The snap-on case comes with a built-in transmitter that essentially “tethers” it to your iPhone, once you’ve installed and configured a free iPhone app.

After the wireless connection is set up, you just arm the system using the iPhone app, put the key fob on your key ring, and … well, forget about it, at least until your iPhone and the key fob are separated by more than about 50 feet.

[youtube=http://www.youtube.com/watch?v=jgWDxNk3dOI&w=520]
When that happens—perhaps because you’ve forgotten your iPhone 4 at a restaurant, or maybe a ne’re-do-well has slipped it out of your purse—the key fob will start vibrating and beeping like crazy. (The fob will also start beeping if someone tries to remove the case while the BungeeAir iPhone app is “armed.”)

Next, you press a button that activates the BungeeAir’s version of “find my iPhone,” which will make your iPhone beep and begin playing whatever song is queued up in its music player. Just follow the music back to your handset—which, by the way, will lock itself the moment it’s out of key fob range.

I tried BungeeAir a few times for myself (see for yourself in the embedded video), and yes, it works as advertised.

Whenever I got more than about 50 feet from my iPhone, the fob began beeping insistently, although the “find my iPhone” function became spotty once I wandered further than 50 feet away from my missing iPhone. If that happens, it’s probably time to fire up the real “Find My iPhone” app.

To my mind, the biggest downside to the BungeeAir Power is the case, which adds a little extra girth and about 2.5 ounces to the iPhone 4’s slender profile. The good news, though, is that the case includes a built-in battery that’ll give your iPhone an extra four hours of juice. (A cheaper version of the Bungee Air minus the battery pack sells for $79.)

Oh, and one more thing. The BungeeAir is designed for the iPhone 4—not the new iPhone 4S, which has a slightly different configuration of buttons that won’t quite fit the openings in the BungieAir case.

So, what do you think? Is a key fob that vibrates whenever your iPhone wanders off worth $99?

Note: Kensington supplied me with a test unit for my review, and I’ll be returning it once I’m finished.