How to check the status of Xbox Live 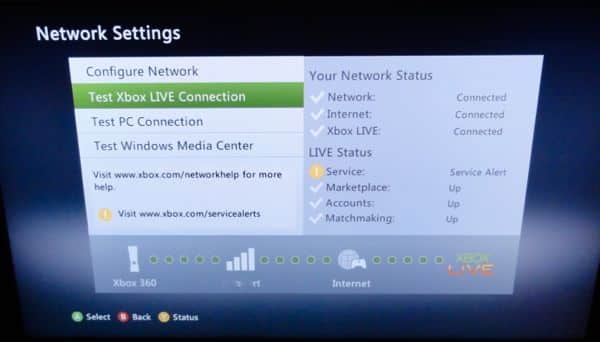 Can’t log in to Xbox Live, the online gaming and media network for the Xbox 360? Chances are you’re not the only one—particularly in the wake of Microsoft’s much-ballyhooed Fall Dashboard update, which was fashionably late to its own coming-out party Tuesday.

The official Xbox Support account on Twitter posted an update Wednesday afternoon that some gamers “may see issues” logging into Xbox Live following the massive update, which now lets users with the Kinect motion-control camera steer their way around the Xbox 360’s Dashboard interface by waving their hands and saying things like, “Xbox, Netflix!” (It’s a neat trick, when it works.)

Indeed, I’ve been having plenty of trouble with Xbox Live myself today, with the network initially refusing to let me sign on, and later insisting that I wasn’t a paying “Gold” member of the service. Luckily, everything seemed to be working again later in the afternoon—fingers crossed.

So, how can you tell if something’s amiss with Xbox Live—or whether your own console is to blame?

First step: check the Xbox Live status page, which will give you a detailed breakdown of which Xbox Live services and apps are up and running—and which aren’t

Another good idea: Follow the Xbox Support feed on Twitter, which posts real-time alerts on Xbox Live service disruptions and other snafus. You might also want to follow Larry Hyrb, a.k.a. Major Nelson, Microsoft’s spokesperson for Xbox Live.

Last but not least, you can test your Xbox 360’s connection to your local network and Xbox Live itself. From the Dashboard, navigate to the Settings menu, then select System, Network Settings, pick your local network from the list that appears, and select Test Xbox Live Connection.