Amazon offers Lada Gaga album for 99 cents, but prepare to hurry up and wait [updated] 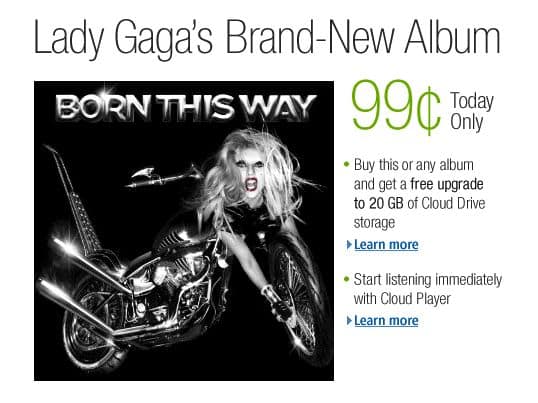 What better way for Amazon to promote its new “Cloud Player” than to offer Lady Gaga’s latest album, “Born This Way”—the entire album, mind you, complete with a digital booklet—for a mere 99 cents? Sounds like a pretty good deal, except scores of Amazon customers are now whipping up a storm after shelling out their 99 pennies, only to see as few as one or two Gaga songs out of 14 promised tracks appear in their digital lockers. Talk about a bad first impression.

The promotion, which is only good for today (Monday the 23rd), lets you grab every track from Gaga’s new “Born This Way” album and either download the tracks as standard MP3 music files or stuff them into Amazon’s just-launched Cloud Player, an online storage locker that lets you stream your tunes on any PC or Android phone.

Those who snap up Amazon’s Gaga deal are also being promised that their basic 5GB Cloud Player storage plans will be upgraded to 20GB for a year, with Amazon advising customers in the fine print that the upgrade could take “up to three hours” to process.

But the wait appears to apply to the Gaga tracks as well as 20GB upgrade, with dozens of confused, angry customers complaining that most of their new “Born This Way” tracks have yet to appear in their online Cloud Players. Indeed, I paid 99 cents myself for the Gaga promotion almost two hours ago, and for now, I’ve only got a single track (“Americano”) and the digital booklet in my Cloud Player locker. (I’ve reached out to Amazon for comment on the delay, and I’ll update this post if I hear anything back.)

“Way to go on giving me 1 song,” wrote one annoyed customer in the user-reviews section. “Great job being prepared to support your promo.”

“I’m hopeful that this is just an Amazon glitch due to high volume of orders,” complained another. “However I’m surprised it is still not complete after such a long time for a ‘digital instant’ order.”

Of course, for every snipe about the missing Gaga songs, there’s another scolding the mob for being so impatient. “I’m not exactly sure why so many users are complaining,” wrote a customer from Chicago, who added that more and more tracks began appearing in his account as the hours wore on. “People get too worked up about having to wait a few minutes for something. Just because it’s digital, doesn’t mean it’s instant. Patience is a virtue.”

Well, maybe so … but then again, Amazon’s promo for the 99-cent Gaga deal does promise that we’ll be able to “start listening immediately with Cloud Player.”

The moral of the story? For customers … don’t be surprised if an almost too-good-to-be true offer like this one leads to a server-snaring stampede.

And for companies like Amazon: if you’re going to sell one of the most anticipated albums of the year for just 99 cents, you’d better make it crystal clear to customers that they may not get instant gratification—particularly if you’re hoping to show off a new cloud-based music service.

Update: In a tweet Monday afternoon, Amazon said it was “experiencing very high volume” from the Lady Gaga offer and assured customers that they would get the “full” album eventually:

We’re currently experiencing very high volume. If you order today, you will get the full @ladygaga album for $.99. Thanks for your patience.