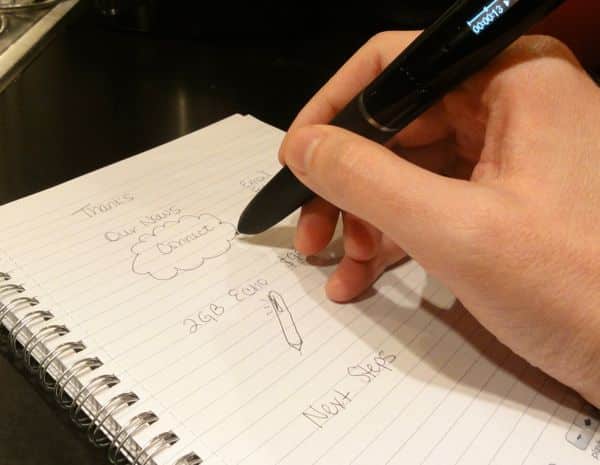 The Livescribe Echo is one of those products that you have to see—and use—to believe. With the help of a built-in voice recorder and an infrared beam in its tip, the Echo not only records every nearby word, it also keeps track of what’s being said as you write, allowing you to go back and tap any word, phrase, or scribble in your notes to zip back to that precise moment in your recording. Pretty cool.

Now Livescribe is sweetening the pot with a new, cheaper pen: the $99 2GB Echo, the first new Livescribe smartpen available for less than $100. (Bargain hunters can grab a refurbished version of Livescribe’s older pen, the Pulse, for as little as $49.) The company is also bowing Connect, a downloadable plug-in for the Livescribe Desktop software that lets users quickly share their audio-enabled, interactive “pencasts” (which boast animated, clickable notes and text) via email, Facebook, and Google Docs. 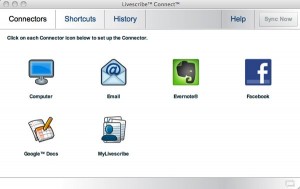 You can configure the Echo smartpen to share pencasts via Facebook, email, Google Docs, Evernote, and more.

Here’s how Connect works. First, you launch the software and set up your various sharing connections; for example, you can establish connections with your Facebook account, your email address, your Google Docs account, or the online Evernote service. You can also set up the software to download pencasts to your PC desktop, to Livescribe’s cloud-based MyLivescribe storage locker, or to your iPhone or iPad.

Once the initial setup is completed, you can share any page in one of your Livescribe notebooks (which come printed with thousands of teeny-tiny tracking dots) by simply drawing a quick back-and-forth line and writing, say, “Facebook” or “Email” over the line you just drew. Next, you tap the pages you want to share, and then double-click to queue up your content for sharing.

The next time you sync your pen with the Livescribe software, boom: your pencast pages will be posted to your Facebook page, emailed to the specified recipient (you can establish contacts and shortcuts during the initial Connect setup), or otherwise shared via Evernote, Google Docs, or to your PC, iPhone, or iPad. (One quick caveat: users of the older Pulse pen or the 2GB Echo who want to email their pencasts or share them on Google Docs will have to pony up $15 for the “premium” version of the Connect plug-in.)

Of course, pencasts aren’t much fun unless you can play them back properly. In the past, your recipients needed the proper software to listen to and click your smartpen recordings; now, however, Livescribe pencasts can be shared as PDFs, and all their audio and interactive features are rendered intact as long as you’re using Adobe Reader 10 or better.

Pretty nice, but here’s the thing: the killer app of the Livescribe smartpen remains its ability to jump to any point in its audio recordings simply by tapping your notes, a compelling feature for students, lecturers, reporters—heck, even bloggers like yours truly.