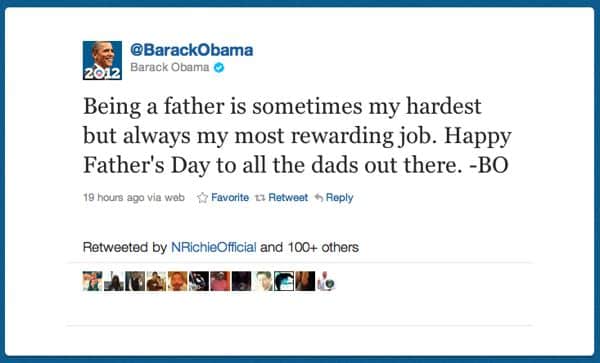 The president has had his own Twitter account for years, but until recently, our Commander in Chief left the actual tweeting to members of his communications staff. All that changed on Sunday, however, after POTUS fired off his first-ever, real-live tweet for Father’s Day:

Being a father is sometimes my hardest but always my most rewarding job. Happy Father’s Day to all the dads out there. -BO

Indeed, Obama’s 2012 reelection campaign announced on Saturday that the president will be taking a more hands-on approach to both his Facebook and Twitter accounts, with “official’ tweets and status updates from the man himself to bear the signature “-BO,” VentureBeat reports.

While President Obama’s 2008 campaign staff took to social networking like a duck takes to water (particularly where fundraising was concerned), the president himself been slower to warm to Facebook and Twitter.

Just a few years ago, Obama admitted that he’d never used Twitter, although he quickly added that he is “an advocate of technology and not restricting Internet access”

If you’re just getting your feet wet with Twitter yourself, following @BarackObama is a pretty good place to start. For someone on the other side of the aisle, try Speaker of the House John Boehner and (particularly) Senator John McCain, who’s a frequent and enthusiastic tweeter.