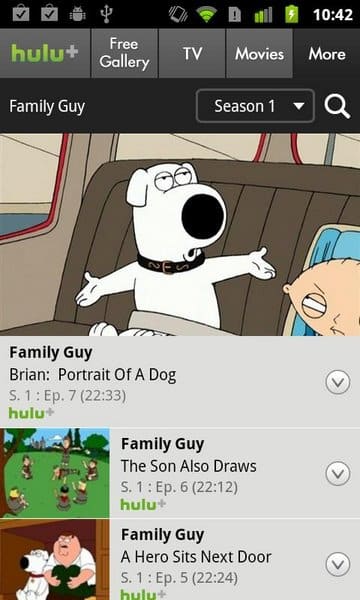 At last, TV lovers who have signed up for Hulu’s premium, $8-a-month “Plus” service can watch episodes of “The Daily Show,” “Glee,” “Modern Family,” and other network television shows on an Android smartphone. That’s the good news; the bad news is that for now, the new Hulu app will only work on six specific handsets.

The long-awaited app is available now on the official Android Market, and it’s free—although to use it, you’ll have to subscribe to Hulu Plus, an $8-a-month “premium” service that lets you watch Hulu’s massive collection of streaming TV shows and movies on television sets, phones, and tablets.

The lion’s share of new TV episodes on Hulu are still free to watch on the web, although you’ll need a Hulu Plus subscription to scour Hulu’s complete archive of older episodes.

A version of the Hulu Plus app for the iPhone and iPad has been available for about a year now, and you can also access Hulu Plus through Xbox 360 and PlayStation 3 gaming consoles, several makes and models of HDTV sets and Blu-ray players, and the Roku TV set-top box. (Click here for a listing of all supported Hulu Plus TVs and devices.)

But owners of Android-powered smartphones with a hankering for mobile Hulu have been cooling their heels—until now.

Unfortunately, the new Hulu app will only work on a lucky six Android devices: Google’s Nexus One and Nexus S phones, HTC Inspire 4G and Motorola Atrix on AT&T, and the Motorola Droid II and Droid X on Verizon Wireless.

Support for more Android phones will be “announced throughout the year,” according to the app description page on the Android Market.

Got any questions about the Hulu Plus app, or about Hulu in general? Let me know!