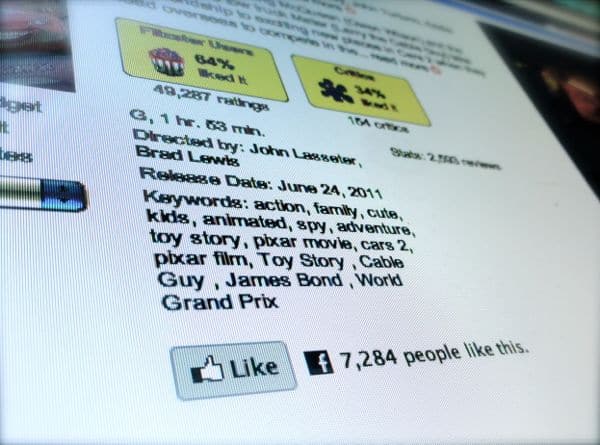 Seems like those little Facebook “Like” buttons are everywhere, from headlines on the New York Times to TV shows on Hulu; heck, even here’s the thing is riddled with “Like” buttons. But what actually happens when you “Like” something online—and what are you saying to the world when you do?

Let’s tackle the nitty-gritty first. Whenever you click a “Like” button, you’ll post a link, a thumbnailed photo (if there’s a relevant image available) and a brief blurb for the content you’re “liking”—whether it’s a news story, a movie listing, or even an article of clothing on an online store—to your Facebook wall.

Of course, anything that appears on your wall will also pop up in the respective “news feeds” of your Facebook friends—and potentially on the news feeds of their friends, too, depending on your Facebook privacy settings.

Once posted, your “likes” can in turn be “liked” or commented on by others (Facebook will notify you if someone “likes” any content you posted), and even a comment on your initial “like” can be “liked.” (Is your head spinning yet?)

Besides “liking” a specific story, video, or product, you can also like a Facebook fan page. These “fan pages” are set up by politicians, celebrities, famous athletes, companies big and small, and yes, even blogs. (Does here’s the thing have a Facebook fan page? Why yes, we do.)

“Liking” a Facebook fan page is a bit different than liking a particular snippet of online content. While “liking” a news story or a video clip is pretty much a one-shot deal (ensuing comments and “likes” notwithstanding), “liking” a fan page—be it President Obama’s, Rafael Nadal’s, or even here’s the thing’s—is more of an ongoing relationship. 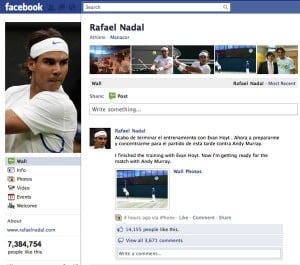 Rafael Nadal’s Facebook “fan” page; if you “like” it, updates from the page will start appearing in your news feed.

Why? Because once you “like” a fan page, you’ll see wall postings of that fan page periodically appear in your news feed. Those fan page postings won’t appear in the Facebook news feeds of your friends, though—or at least, not unless you happen to (you guessed it) click the “Like” button for a particular post.

Naturally, the “Like” button has privacy implications. For example, “liking” a Facebook fan page allows the owner of the page to collect any publicly available information about you: your age, sex, what country you’re from, the city you live in, and so on—although the data appears grouped together in a big chart, without any names attached. Your friends on Facebook may also see that you’ve “liked” a page or another bit of content … which is the whole point of “liking” something, I suppose.

There’s also been chatter that “Like” buttons can be used to track your browsing history even if you don’t click them, although Facebook swears that it anonymizes and eventually discards any browsing data it collects. (Ironically, the Wall Street Journal story that raised privacy issues about the “Like” button has its own, prominent “Like” button.)

OK, so now we know what the “Like” button does—but what does it mean? If you “like” a story, or person, or a page, are you saying you approve of it?

Not necessarily, according to Facebook, which suggests instead that you’re merely “making a connection” with the content you liked—or that you want to “let someone know that you enjoy” the content in question.

Maybe so, but isn’t it a little strange to “like” a story about, say, a tornado that left hundreds of people homeless? Well, yes, and that’s why several news organizations have opted for a variant of the button that’s labelled “Recommend” rather than “Like.”

The Facebook Help Center is also careful to note that you can “unlike” something at any time, and that you can specify exactly who can see what you’re “liking.”

So, want to give the “Like” button a whirl? If so, I humbly suggest you try “liking” here’s the thing; if you do, you’ll get periodic updates from our Facebook wall in your news feed. Don’t worry—if you don’t like what you see, you can always click the “unlike” link in the left-hand column of the fan page. (I won’t take it personally, I promise.)

Still have questions about “liking” something on Facebook? Let me know!