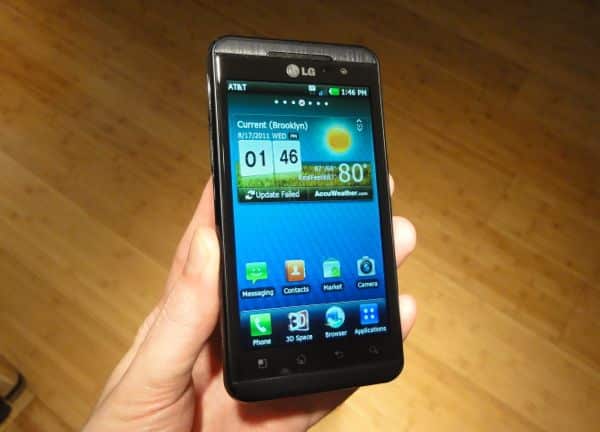 Get ready for yet another Android superphone with a glasses-free 3D display—and yet again, while the phone itself is fine, the fuzzy 3D screen is leaving me with little more than a headache.

Set to land in AT&T’s handset lineup any day now, the $99 (with contract) LG Thrill marks yet another eye-popping Android phone with a massive 4.3-inch display, not to mention a bleeding-edge processor (1GHz dual-core, if you must know) and a front-facing camera for video chat.

But the Thrill marks just the second phone in the U.S. with a 3D screen that doesn’t require obnoxious 3D glasses. The first was the HTC Evo 3D on Sprint, which I reviewed back in June.

So, 3D without glasses—sounds like heaven, yes? Well … not really, no.

To achieve the 3D effect, handsets like the LG Thrill, the Evo 3D, and even the recent Nintendo 3D handheld game console use a technology similar to those novelty posters that “wink” at you as you move from side to side.

Those creepy winking Mona Lisa pictures typically use tiny lenses to bend the separate images to your left and right eyes, while the latest glasses-free 3D displays use a series of microscopic vertical slits to work their magic.

That’s the theory, anyway. The reality of recent glasses-free 3D screens is that your eyes must be at a precise distance and angle for the 3D effect to work at all—otherwise, the picture collapses into a jumble of flat double images.

Which brings us back to the LG Thrill, a no-glasses-required 3D phone that brings little if anything new to the 3D table.

As with the Nintendo 3DS and the HTC Evo 3D, the Thrill demands a steady hand and a steady head for its 3D effect to work. A viewing distance between 12 and 15 inches is recommended—reasonable enough, except you must also hold the phone at the perfect angle for the 3D effect to work. A few degrees off, and you’re back in 2D.

Even if you do manage to hold the Thrill just so, the actual 3D effect falls well shy of “Avatar”-quality. Instead of a razor-sharp 2D display, the Thrill’s 3D images look disappointingly fuzzy, with obvious vertical pinstripes marring the view. Switch back to 2D mode, though, and whoosh—the annoying pinstripes disappear.

The Thrill comes with a handful of 3D games (including Asphault 6, a driving sim; Nova, a sci-fi shooter; and Let’s Golf 2), a gallery of 3D video clips and photos, and a link to YouTube’s 3D video channel. On the Thrill’s home screen, you’ll find a handy guide to all the phone’s 3D content, complete with a spinning, “comin’ at ya”-style interface that serves as an appropriately eye-popping 3D portal.

On the back of the Thrill is a pair of stereoscopic camera lenses for snapping 3D pictures—and the results, as with the HTC Evo 3D on Sprint, are meh.

Yes, there’s some initial fun in taking 3D pictures of your living room or the garden, and shooting 3D video of the cars driving down the street has its charms.

But the novelty quickly wears thin, particularly when you notice that the resolution of the Thrill’s five-megapixel camera gets chopped to about three megapixels in 3D mode. The good news, at least, is that you can pipe 3D videos and images to a 3D TV set over the Thrill’s HDMI video-out port, or share your 3D home movies on YouTube.

Of course, there’s nothing stopping you from ignoring the Thrill’s 3D features altogether—and indeed, the peppy Thrill holds its own quite nicely as far as standard Android smartphones go.

Bottom line: If you want the Thrill for its bargain price, speedy processor, or solid Android features, by all means—go for it.

But don’t get the Thrill (or the HTC Evo 3D, for that matter) if you’re hoping for a life-changing, glasses-free 3D experience—because, frankly, you won’t get one.