Is there an app for watching Flash videos on my iPad? (reader mail) 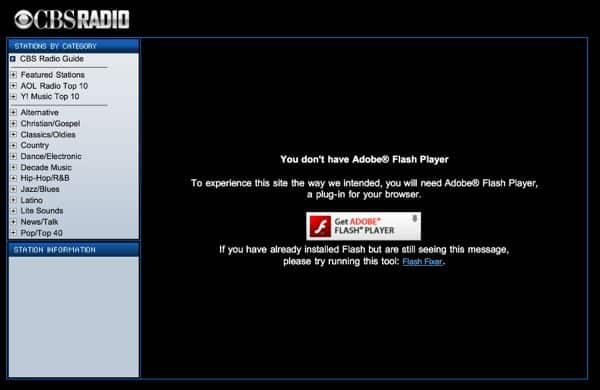 Presumably, this is some corporate battle between Apple and Adobe. But is there an app that can be used in lieu of Adobe and do you have any insight to this issue? Thanks.

P.S. On the other hand, perhaps it is best that I do not pollute my brain further with sports talk radio…

On the one hand, Apple claims Adobe’s Flash technology (which powers streaming videos on sites ranging from Hulu to YouTube, not to mention interactive modules on countless other sites) is too slow, buggy, and power-hungry for its mobile devices, while Adobe accuses Apple of walling off its iOS platform from Flash applications developers. (You can read all about it here, if you’re interested.) 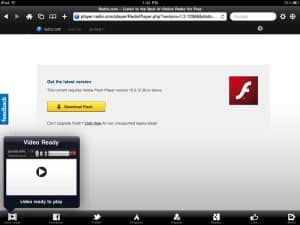 Skyfire for iPad can stream Flash-enabled videos to the iPad—for a price.

The bottom line, though, is that for now, there’s no Flash on the iPhone or the iPad—period. And while some Flash sites now boast fully functional, non-Flash versions for the iPhone and iPad, many others still don’t.

That doesn’t mean you’re totally out of luck, however.

For example, Apple’s YouTube app (it’s already on your iPad) lets you watch just about any video on YouTube, no Flash required, while Hulu has its own iPhone/iPad app for watching streaming videos (provided you’ve subscribed to Hulu’s $7.99-a-month premium subscription plan).

And if it’s sports radio you’re after, check out Radio.com, a free iPad app from CBS Interactive that features more than a dozen sports radio stations.

Last but not least, there’s Skyfire, a $5 browser available on the App Store that will stream Flash videos to the iPhone and iPad.

The process is a tad clunky; you must tap the “analyze” button to check for playable videos, and even then you must wait a good 30 seconds or so before playback begins. But if you’re patient, Skyfire does the trick about 80 percent of the time.

Hope that helps, and let me know if you have more questions!

Click here for more tips and how-tos for the iPad.