Got jury duty? 7 dos and don’ts for bringing electronic devices & gadgets to court 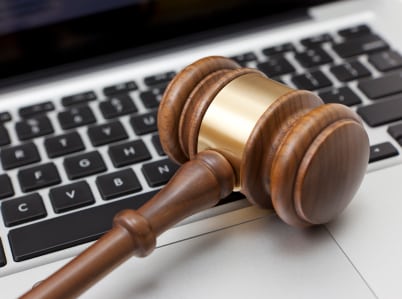 (Updated 11/8/2017) Guess who just finished a brief stint of jury duty? Yep, yours truly—and I have to say, the rules for toting electronic devices like smartphones, laptops, and other gadgets in court have changed dramatically since the last time I was called to serve.

Back in the day (and we’re only talking six or seven years ago, mind you), any cell phone with a built-in camera was verboten in most courthouses, and security may even have given you a hard time about bringing in a laptop. And free Wi-Fi in the waiting room? Please.

In recent years, though, courthouses from coast to coast have become much friendlier to gadget-bearing jurors. Cooling my heels in a jury assembly room in Brooklyn recently, I spotted dozens of electronic devices like laptops and smartphones, including my own MacBook Air and iPhone.

But just because you can bring your phone to court doesn’t mean you can use it in a courtroom—and indeed, expect a stern rebuke (or worse) from the bench if you start tweeting from the jury box.

Read on for a few dos and don’ts about bringing your mobile electronic devices court, starting with…

DO: Check online or call ahead for your local courthouse’s gadget policy

While most courthouses now allow cell phones, smartphones (including those with cameras) and laptops, others are more strict when it comes to bringing your gadgets. Make sure to call your local courthouse in advance and ask before heading in for jury duty with mobile gear in tow.

DON’T: Talk on your cell phone in the jury pool waiting room

Sitting for hours in the jury assembly room waiting for your name to be called is bad enough; no need to make matters worse by annoying fellow would-be jurors with loud phone conversations. Take your calls out in the hallway, or in a separate jury lounge if there is one.

DO: Use your laptop or text/surf on your smartphone in the jury assembly area, or in a hallway

Chatting on your phone in the waiting room might be a no-no, but there’s (usually) nothing wrong with texting, tweeting, or working on a laptop—provided you’re not texting or tweeting about a case you’re hearing as a juror, that is. (More on that in a moment.) And if you’re taking a break in a courtroom hallway, feel free (again, pending courthouse policy) to power up your gadgets.

DO: Ask about free Wi-Fi

Many courthouses offer free Wi-Fi in the jury room, perfect for catching up on work or checking email while you wait. Just make sure to get the exact name of the courthouse Wi-Fi network; don’t just connect to the first Public Wi-Fi network that you find.

DON’T: Use your cell phone or laptop in a courtroom

Once you’re sitting in the gallery or jury box of a courtroom, all bets are off as far as your gadgets are concerned—particularly if court is in session (and if you’re a prospective or chosen juror, it most likely is in session).

Most judges will demand that all cell phones and other electronics to be turned off and stowed, and if the judge catches you sneaking a peek at your iPhone, expect a scolding or even a visit from the bailiff. And don’t even think of snapping a picture unless you get approval from the bench … which you probably won’t get, unless you’re a news photographer.

DON’T: Search for information about your trial online

If you’re chosen to sit on a jury, resist the urge to Google your particular case during a break. Jurors are only supposed to base their decisions on evidence and testimony from the trial itself, and if the judge finds out you’ve been reading up about the defendant on your Android phone, that fact alone could be grounds for a mistrial.

The usual admonishments for jurors about discussing a case while the trial is in progress also apply to text messages, Twitter, and Facebook. Why? Because anything your text, post, or tweet could be used as evidence of bias—and yes, grounds for a mistrial. If you’re sitting on a jury, think twice before you update your status online; after all, you don’t want to become another headline, do you?