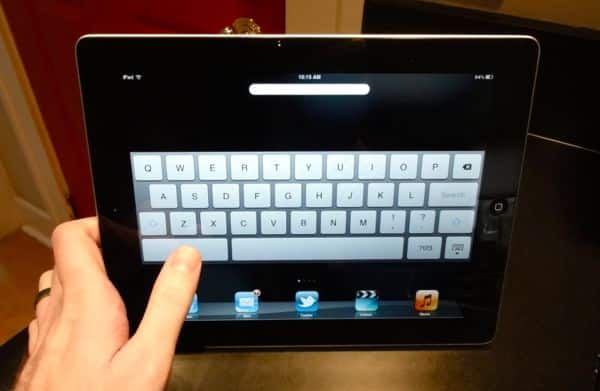 By default, the iPad’s on-screen keyboard is anchored to the bottom of the display—as it should be, right? But here’s the thing: you can, if you wish, undock the iPad’s keypad, allowing it to essentially “float” smack-dab in the middle of the screen.

To undock the iPad keyboard, simply pull up the keypad itself (swipe to the right if you’re on the iPad home screen, or tap any text-entry box), then tap and hold the key marked with a keypad icon—the one that’s sitting in the bottom-right corner.

Just tap “Undock” to let the iPad’s keyboard float in the middle of the screen.

Next, tap “Undock” on the small pop-up window that appears, and presto! The iPad keyboard should now be floating about dead-center in the middle of the display. (Another option you’ll see in the pop-up is “Split,” which splits the iPad keypad in two.)

Why would you want the iPad keyboard to float in the middle of the screen in the first place? Well, it could make for easier typing if you’re holding the iPad in both hands as you tap with your thumbs—particularly if you’re holding your iPad vertically rather than horizontally. Personally, I prefer keeping the keypad docked to the bottom of the screen, but that’s just me.

So, to dock, or not to dock? Cast your vote in the comments, or let me know if you have more questions.