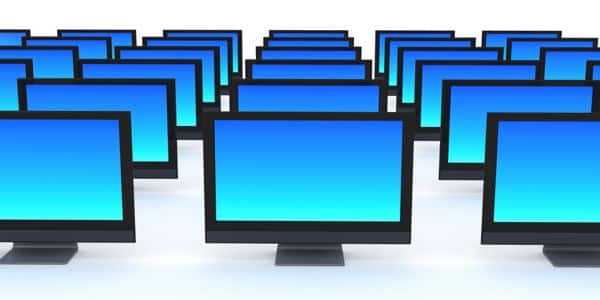 (Updated: 3/28/2018) Not that long ago, there was only one question you had to answer when it came to picking a TV screen: how big. Today, though, size is just the first in a series of questions you have to tackle, and one of them continues to be perplexing: 1080p, 720p, or 420p. What’s with all the numbers, and what’s this “p” thing, anyway?

Well, here’s the thing: those numbers refer to lines of resolution in a video image—and the more lines, the sharper the picture.

An old-school, garden-variety tube TV set can handle 480 lines of resolution from top to bottom, while the latest top-of-the-line 1080p HDTVs have a total of 1080 lines of vertical resolution.

Of course, a video image doesn’t just have vertical resolution; it has horizontal resolution, too. This is where it gets a bit confusing, but bear with me.

What resolution is considered HDTV?

Conventional wisdom has it that any TV with a resolution of 1280 by 720—or 720p—and up counts as high definition. Anything less, and we’re talking SD (standard definition).

So while a 1080p HDTV has more than twice the total resolution of a 720p HDTV, both are still considered to be HDTV sets. And yes, you gusesed it: generally speaking, a 720p HDTV will be cheaper than an equivalent 1080p HD set.

When does the “p” in “1080p” or “720p” come into play? Well, the “p” stands for “progressive” video, in which every frame is “drawn” from top to bottom in a single pass, making for a smoother, more detailed image.

Meanwhile, you also have “interlaced” video, in which each frame is drawn in two passes—once for the odd lines, and a second time for the even lines.

But there’s a trade-off with interlaced video. Because the image is drawn in two separate passes, it tends to look … well, “jaggy” is one way of putting it. Progressive video, on the other hand, looks much smoother and solid. Think of the teeth of a comb; that’s how the image on interlaced video tends to look compared to the seamless edges of progressive video images.

So, why bother with “interlaced” video when progressive looks so much smoother and sharper? Because interlaced video can deliver the same size video image as progressive video does, but with only half the effort—a key factor when it came to yesterday’s television sets and relatively primitive broadcast technology.Update: you won’t see internlaced TVs in stores anymore

An old tube TV from, say, forty years ago was probably a 480i set—only then, no one bothered to make the distinction between interlaced and progressive, namely because buying a progressive-scan TV (or an HDTV of any sort, for that matter) simply wasn’t an affordable option.

These days, even bargain TVs can handle video from progressive-scan DVD and Blu-ray players (which boast a standard, or “native,” resolution of 1080p) without breaking a sweat.

Confused yet? You’re not the only one.

Video technology isn’t easy, and it’s only now with the arrival of razor-sharp HDTVs that regular consumers like us are having to deal with screen resolution at all.

Bottom line: While it’s nice to know that the “p” in “1080p” stands for, it’s beginning to matter less and less.

Then again, you’re better off knowing what you’re talking about while browsing the aisles of your neighborhood big-box store.

Shopping for your first HDTV? Check out my cheat sheet for first-time HDTV buyers.