Free phone calls through Gmail: 8 things you need to know 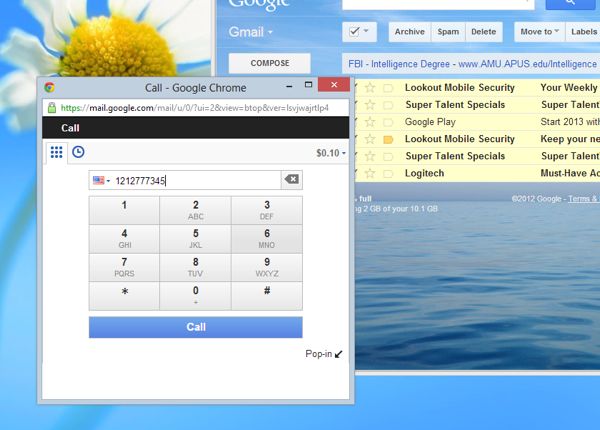 If you’re in the U.S. or Canada and you’re a Gmail user, heads up: you can make free phone calls through your PC or Mac to any domestic cell phone or landline. As always, though, there are a few ifs, ands, and buts.

Google has been offering free domestic voice calls to U.S. and Canadian Gmail users for a few years now—and indeed, just last month, it extended its offer (again) through 2013.

Making voice calls through Gmail is a cinch. Just launch your favorite web browser, open your Gmail inbox, and click the little handset icon in the bottom-left corner of the page.

Update (6/13): Wondering what happened to Gmail’s Google Voice dialer? Google hid it to make way for its “Hangouts” video-chat feature. Don’t worry, though; you can get Google Voice back into Gmail in just a few clicks. Here’s how!

When you do, a dialer will pop up on the screen. Type in a phone number, click the blue “Call” button, and within a second or so, you’ll hear a familiar “brrring, brrrrrrring!” through your PC’s speakers. 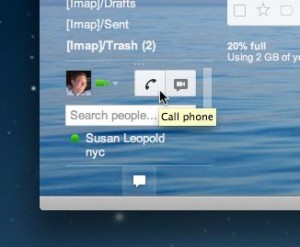 But like I said, there are a few things to keep in mind, starting with…

…and then only to U.S. and Canadian mobile and landline numbers. If you’re an international Gmail user, sorry—no free calls for you.

2. Domestic calls over Gmail are free through the end of 2013 only

Beyond that, no guarantees. Google first began offering free voice calls through Gmail back in 2010; since then, it’s extended the generous offer three times, most recently last month. Will Google keep footing the bill for Gmail voice calls in 2014, or will the party be over in a year’s time? Good question.

3. If you want to make international calls with the Gmail dialer, you’ll have to pay up

Rates range from two cents a minute (for landlines in France, Germany, and the U.K.) to a whopping $6.90 a minute (for calls to satellite phones). You can check the complete list of international Gmail calling rates right here.

4. You don’t need a headset to make Gmail voice calls

If your PC or laptop has built-in speakers and a microphone (and nowadays, most do), you can start making Gmail calls right away, no headset required. That said, your callers will probably hear you more clearly if you do use a wireless or (ideally) a wired headset. 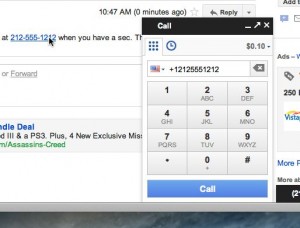 Click a phone number in a Gmail message and the dialer will pop up automatically.

5. You can click any phone number in a Gmail message to dial

If you need to call someone who sent an email to your Gmail account, look for their phone number in the body of the message (like, say, in their email signature) and click it.

When you do, the Gmail phone dialer should pop-up automatically, complete with the number you just clicked.

All you have to do is click the blue “Call” button to start chatting.

6. You must make your free calls through the Gmail interface on your computer

In other words, no—you can’t make free Gmail calls through your iPhone or Android phone (or not officially, at least).

7. Replacing your landline or cell phone with Gmail isn’t the best idea

For one thing, you can’t add a third party to a call using the Gmail dialer. More importantly, though, you can’t make 911 calls through Gmail.

8. You can receive calls through Gmail if you have a Google Voice number

Sure, your friends and family can call you through Gmail, but they’ll need a number to dial first.

You can get one in a flash through Google Voice, a clever (and free) phone service that will (among other things) transfer incoming Google Voice calls to any of your various home, office, or mobile numbers.

Once you’ve signed up for Google Voice, your Gmail dialer will “ring” whenever someone dials your Google Voice number.

Keep in mind, though, that Google’s offer of free domestic calls through Gmail only covers your outgoing calls; incoming calls don’t count.

You can port your mobile number to your Google Voice account, if you wish; that said, doing so will automatically terminate your mobile service, meaning you may owe an early termination fee if you signed a contract with your wireless carrier.