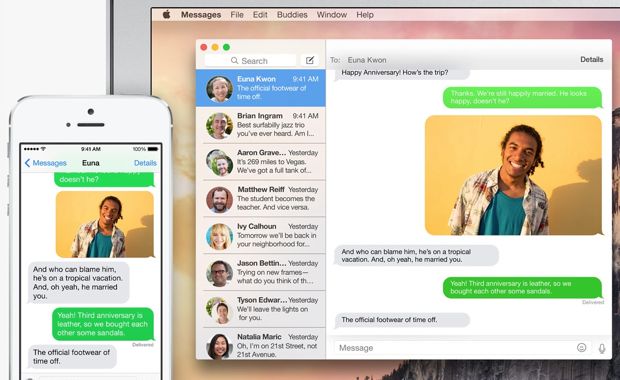 From its distraction-free “dark mode” to the (hopefully) hassle-free “Instant Hotspot,” the upcoming “Yosemite” update for iMac and MacBook users boasts a bevy clever, time-saving features.

Read on for eight of Yosemite’s most promising bells and whistles, from the ability to juggle standard SMS messages to a revamped Mail app that lets you doodle on photo and PDF attachments.

At a glance: OS X “Yosemite” is set to arrive this fall as a free update for Mac users, and you can get all the details at Apple.com.

Maybe it’s just me, but getting my iPhone to work as a Wi-Fi hotspot for my MacBook Air has always been a royal pain. 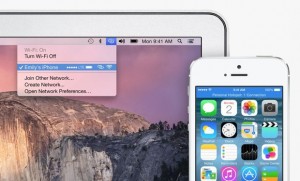 Yosemite’s “Instant Hotspot” feature promises to tether your iPhone to your Mac in a flash, no setup required.

First, I have to dig into my iPhone settings to turn on the “personal” hotspot feature (and no, simply leaving it on all the time never seems to work). Then I turn off my MacBook’s Wi-Fi and turn it back on, since my iPhone never shows up in my Mac’s Wi-Fi menu without my poking it first. Ugh.

That’s why I’m pretty excited about Yosemite’s new “Instant Hotspot” feature, which promises to let us “tether” our iPhones (or iPads) to our Macs in a single step, no fiddling with your iPhone required.

All you’ll have to do—theoretically, anyway—is open your Mac’s Wi-Fi menu, and your iPhone will appear there whenever it’s in range; just select it, and you’re connected.

Sounds great … provided it works as advertised, of course.

Ever feel distracted by all the bells and whistles on your Mac’s desktop? Yosemite’s new “dark mode” is designed to keep you focussed by dimming all your bright menu bars and windows to a dark, unobtrusive gray, all the better for burying your beak in your work.

I admit, I rarely open the Notification Center on the right side of my Mac’s screen—well, not unless I’m clearing out unread (and weeks-old) notifications.

Well, the neglected (in my case, anyway) Notification Center looks to get a lot more useful thanks to the drag-and-drop “widgets” coming in Yosemite.

Among the widgets on tap in Yosemite: weather, stocks, battery life, reminders, and world clocks, as well as a handy desktop calculator. Developers of Mac apps will also get a crack at writing their own Notification Center widgets, too.

Best of all, you’ll be able to drag and drop widgets into (and out of) Notification Center as you see fit.

4. Marking up your email

Ever wish you could just scribble some quick notes onto the PDF or the snapshot that you’re attaching to an email? 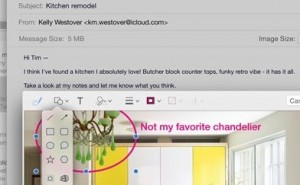 Ever wanted to doodle on an email attachment? Once Yosemite arrives, it’ll be easy.

The new Mail app for Yosemite will let you sign a PDF with your fingertip, draw an arrow with your mouse, circle a key paragraph, or even scribble a joke into a thought bubble, all without leaving the Mail program.

5. Answer iPhone calls on your Mac

I already mentioned this feature in my recent iOS 8 preview, but it bears repeating: you’ll be able to answer iPhone calls on your Mac.

Whenever your iPhone is nearby, incoming voice calls will pop up an alert in the corner of your Mac’s screen, complete with the name and photo of the caller (provided they’re listed in your address book).

If you wish, you can go ahead and answer the call on your Mac, effectively turning your iMac or MacBook into a speakerphone.

6. iMessage now gets your SMS texts, too

I’ve found the Mac’s iMessage app to be pretty handy for answer incoming iMessages from my desktop’s full-size keyboard. Now, if only iMessage app could send and receive standard SMS text messages, too…

Well, good news: the new iMessage app in Yosemite (see the image at the top of this article) will, indeed, be able to juggle regular text messages, perfect for texting Android-toting pals from your iMac or MacBook.

Pinch your trackpad in Safari for OS X “Mavericks” and you’ll get a “tabs view” that lets you scroll quickly through all your open tabs. Not bad, but it’s not really all that useful—in fact, it’s a Safari feature that I rarely use myself. 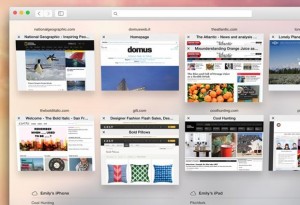 Yosemite’s new “tabs view” for Safari will make it easier to see all your open browser tabs at once.

I’m hoping to get a lot more use out of Yosemite’s new-and-improved Safari tabs view, which gives you a top-down view of all your tabs at once, neatly stacked according to site. (The new Yosemite tabs view is also coming to the iPad, incidentally.)

One of the first things I tried with iOS 7’s year-old AirDrop feature was wirelessly “dropping” a file from my iPhone to my iMac—and yes, I was instantly disappointed to find that it didn’t work. Indeed, up to now, wireless AirDrop transfers have strictly been an iOS-only affair.

All that’s set to change thanks to OS X Yosemite, which will finally let iMacs and MacBooks get in on the AirDrop action—meaning that sending (for example) a folder of photos from your Mac desktop to a friend’s nearby iPhone or iPad is about to get a whole lot easier.

Got questions about OS X Yosemite? Post ’em below!