Android tip: Get Android notifications on your PC or Mac desktop 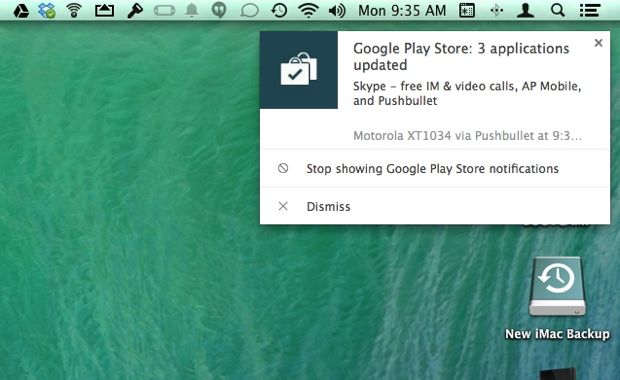 So, you’re on a roll with a tricky project on your PC, but you keep getting distracted by your frantically buzzing Android phone.

Well, you could always get up and unlock your handset to see what all the fuss is about, but you’ll risk breaking your train of thought.

Instead, try this: an app that sends all the notifications from your Android device—including alerts about incoming text messages, phone calls, and notifications triggered by your various apps—straight to your PC or Mac desktop.

Both Moaxis and Pushbullet send notifications from your Android phone to your Mac or PC.

If the concept sounds familiar, maybe you’re thinking of the upcoming notification features in iOS 8 and Mac OS X Yosemite, which promise to let iPhone and iPad users answer texts and phone calls on their Macs.

All very nice, but iOS notifications won’t be coming to your Mac until this fall.

Meanwhile, there are a couple of Android apps that can do the desktop notification trick right now.

The apps I’m thinking of are Moaxis and Pushbullet, and they’re both free on the Google Play store.

The two apps have their differences, but in general terms they do the same thing: they push most of the notifications from your Android device to your Mac or PC desktop.

Both Moaxis and Pushbullet have helper apps that sit on your Android phone, where they listen for incoming notifications.

When an Android notification gets triggered, the apps send the alert to your PC with help from an easy-to-install desktop client—or, if you wish, you can skip the desktop program and install an extension for your web browser of choice.

The alerts show up as little banners that slide into view in the top corner of your PC or Mac desktop—same as with (most) standard system alerts. 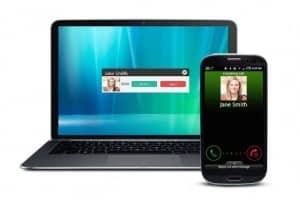 Moaxis lets you answer or decline Android calls from your Mac or PC, but—for now, at least—you’ll need a Bluetooth headset connected to your phone to speak to callers.

Moaxis, for its part, sounds a bit more similar to Apple’s vision of iOS notifications on a Mac. For example, you can actually respond to text messages through Moaxis’s desktop alerts, and you can also answer or decline phone calls—although if you actually want to speak to a caller, you’ll need a Bluetooth headset that’s connected to your phone.. (Actual “hands-free” voice calls through your PC or Mac isn’t ready yet, but it’s in the cards, Moaxis promises.)

Pushbullet lacks Moaxis’ ability to let you respons to text messages or answer calls; indeed, Pushbullet won’t let you interact with “pushed” Android notifications at all, except to dismiss them.

That said, Pushbullet has a nifty feature up its sleeve: the ability to push messages, links, small file attachments, photos, addresses, and to-do items back and forth between your linked devices. Neat.

Pushbullet will also let you sign in using the Google ID stored on your Android phone, making for a fairly easy setup process. Moaxis, on the other hand, requires you create an account, complete with another password.

Intrigued? Then give ’em a try—after all, both Moaxis and Pushbullet are free.

Note: In case you’re wondering, no—I haven’t received any compensation from the developers of these apps for writing about their products.