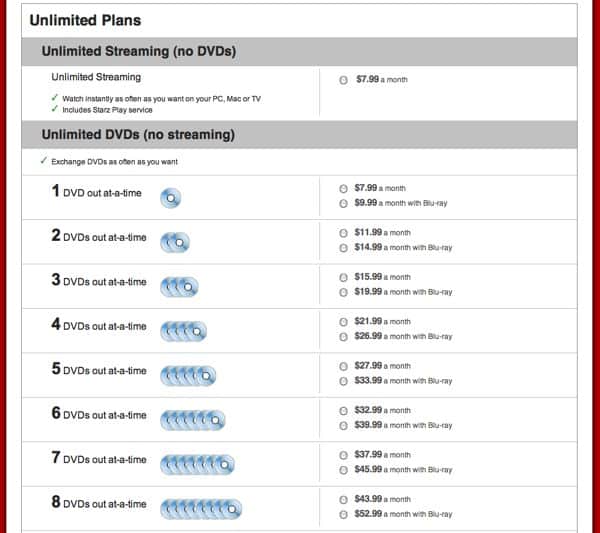 First, the good news: Starting today, anyone who’d rather stick to DVDs and skip the instant streaming can sign up for a new, $7.99 DVD-only plan.

The bad news? Netflix has also decided to chuck its combined DVD-and-streaming plans, meaning that subscribers who want to rent DVDs and watch instant movies from Netflix will have to sign up for a two separate plans—and yes, expect to pay more in the bargain.

The news comes via Netflix’s official company blog (which earlier announced that instant videos will again be sortable on Netflix’s website), with the upcoming plan changes slated to take effect immediately for new subscribers or “on or after” Sept. 1 for current members.

Under the new plan, Netflix users who used to pay $9.99 for unlimited instant movies and a single at-home DVD will now pay a total of $15.98—or $7.99 for a “Watch Instantly” subscription and another $7.99 for the one-at-a-time DVD-only plan. 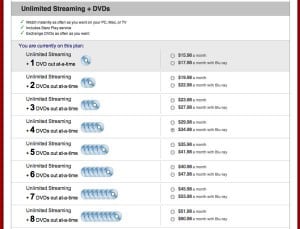 f you want to rent both DVDs and stream videos from Netflix, here's what you'll be paying.

“With this change, we will no longer offer a plan that includes both unlimited streaming and DVDs by mail,” explained Netflix exec Jessie Becker in a company blog post, adding that offering DVD-by-mail “as a $2 add-on” to its $7.99 streaming-only plan “neither makes great financial sense nor satisfies people who just want DVDs.”

Some of Netflix’s more expensive DVD-by-mail plans will also see price hikes when instant streaming is included, although the priciest plans will actually see price cuts once you add streaming into the mix.

According to a chart of Netflix’s new plans, the two DVD-at-a-time plan with streaming will now cost $19.98 a month rather than $14.99. Three DVDs and Watch Instantly movies will set you back $23.98 a month, versus $19.99 previously, while four at-home DVDs plus instant movies will cost $29.98 a month instead of $28.99. (You can check out details for the new plans if you log into your Netflix account and click the “Change plan” link—and don’t worry, you won’t have to change your plan if you click the link.)

That said, getting six DVDs a month with unlimited streaming will now cost you $40.98 a month—about a buck less than the old 6 DVD/instant streaming combo plan. Once you head up to eight DVDs at a time with streaming, the new price will be $51.98 a month, or about $4 cheaper than the current price.

But wait—there’s another wrinkle. If you want to rent Blu-ray discs with your Netflix account, kiss any price savings on the priciest plans goodbye, with the six-at-a-time DVD plan plus Blu-ray and streaming slated to cost $47.98 a month—an almost $6 monthly rate hike. For eight discs at a time, including Blu-ray and streaming, prepare to cough up $60.98, or about $5 more than the current rate.

Of course, those who only want to rent DVDs may welcome the new, cheaper DVD-only plans. Netflix’s new, four-at-a-time DVD-only option, for example, costs $21.99 a month, or $2 cheaper than the previous four DVD-watch instantly combo plan,

So, given the coming rate hikes, is Netflix still worth it? Let me know what you think!