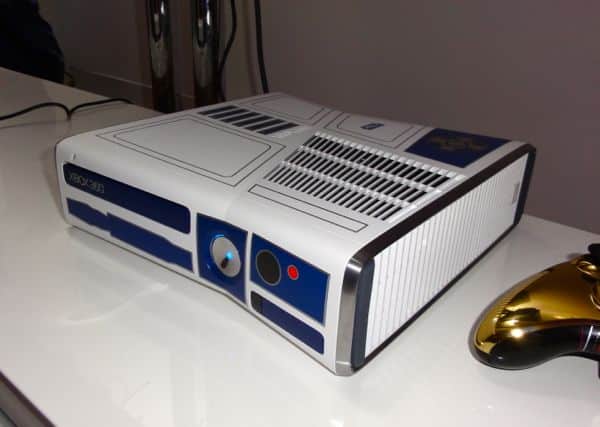 Microsoft showed off its latest arm-waving, body-twisting Kinect games for the Xbox 360 at a swank event in Manhattan last night, but rather than swing a virtual golf club or pet an adorable (if digital) lion cub, I made a beeline for a new Xbox console that’s a dead ringer for one of my favorite droids in the galaxy.

Yes, meet the R2-D2-ized version of the Xbox 360 from the Limited Edition Kinect “Star Wars” Bundle, complete with the same white-and-blue panels, circular “eye,” and even the little red dot (what is that for, anyway?) that decorate our favorite glob of grease.

Other goodies in the “Star Wars” Xbox 360 bundle ($449, on sale starting December 31—yeah, that’s a bit of a wait) include a 360 GB hard drive and an off-white Kinect motion-control camera (which matches the R2-D2-themed console).

Also in the box: the upcoming “Star Wars” Kinect game, which lets you duel Sith lords with your lightsaber and pilot a hurtling pod racer (among other interstellar activities and mini-games) by waving your arms in the air.