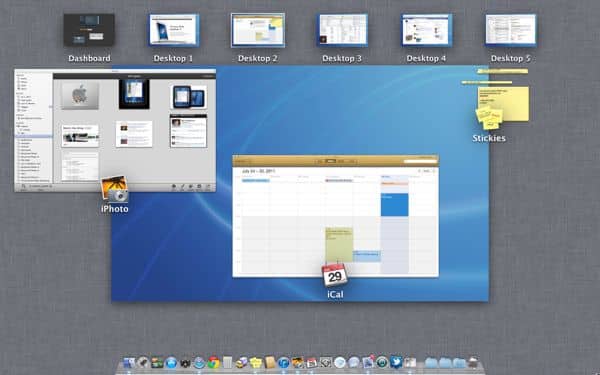 Did you know that there’s more than one desktop on your Mac? Yep, it’s true—and in “Lion,” the just-released update for the Mac operating system, you can pretty much have as many desktops as you want, each filled with its own assortment of open documents and applications.

Sound confusing? Sure. After all, most of us are used to having a single desktop on our systems—you know, the one that’s directly in front of us. The idea of have more, “virtual” desktop spaces with open windows that you can’t see can take a little getting used to.

Once you get the hang of it, though, these additional desktop spaces—which you manage in Mac OS X Lion with a new feature, dubbed “Mission Control”—can become addicting, even essential.

Indeed, when I switch to a PC running Windows, which doesn’t have built-in desktop “spaces” like the Mac does, the thought of having only one space for all my windows leaves me feeling cramped and claustrophobic.

Let’s take a quick tour of the desktop spaces in Lion’s new “Mission Control”—and keep in mind that older versions of the Mac operating system also have the “spaces” feature, which you can manage in the System Preferences panel under the Apple menu.

1. First, go ahead and activate Mission Control by clicking its icon in the Mac OS “Dock,” swiping up with three fingertips on your MacBook trackpad, pressing the Mission Control key (the one marked with three little boxes) on your Mac keyboard (it should be in the top row), or by following one of these methods. 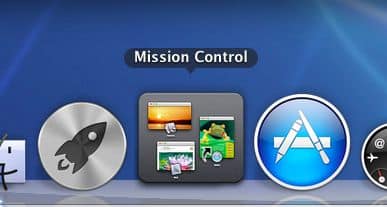 2. Now you’ll see an overhead view of all your open applications, windows, and spaces. In the example I’m showing here, we’ve only got two spaces running: the Mac OS “Dashboard,” a window with “widgets” for things like the weather, stock tickers, and news headlines, and a single desktop space. 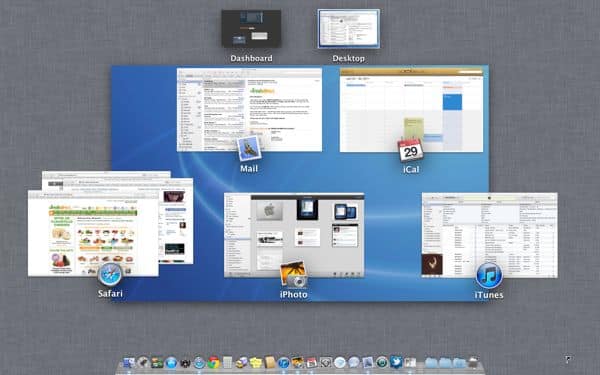 On my desktop, I have five applications open—Mail, iPhoto, iCal, iTunes, and Safari, not to mention a total of three Safari open windows at once. Yep, things are starting to get a little crowded.

3. OK, time to spread out a little bit. I’d like to deal with my Mail in a completely separate space on my desktop, so it can be open and ready for me without getting lost in a pile of windows. So here’s what we’ll do; I’ll activate Mission Control again, click and hold my Mail window, and then drag it up and over to the upper-right corner of the screen—where all of a sudden, a new “space” with a big “+” sign appears. 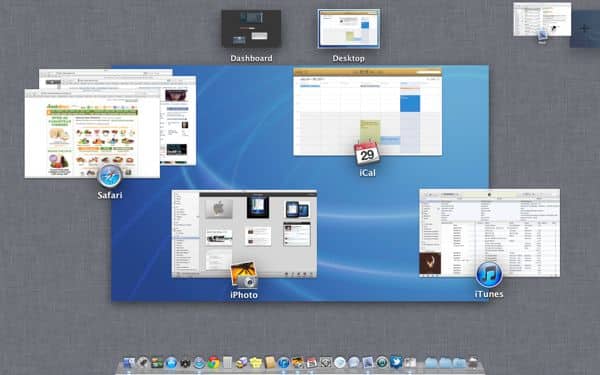 4. I drop Mail into my new space, and presto! I now have another desktop (helpfully labeled “Desktop 2”) with just my Mail application open. To visit my new space, I just activate Mission Control and click the Desktop 2 icon, which immediately zooms in and fills my screen. (You can also click the two arrows in the upper-right corner of the Mail window to enter a “Full Screen” mode—or not, it’s up to you.) 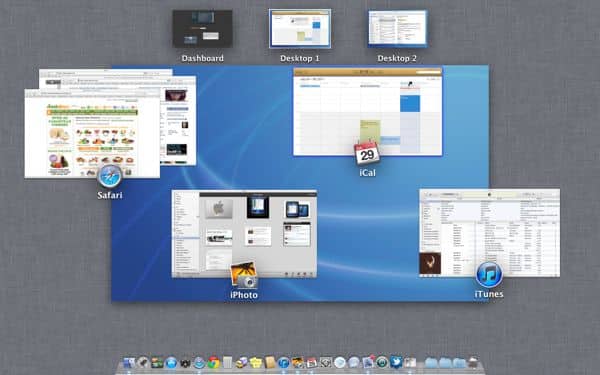 5. Now I’ll go ahead and rinse, repeat with more of my open applications, until I have a total of six desktop “spaces” (plus the Dashboard space) going at once. To switch between your desktops, open Mission Control and click the desktop space you want to jump to. You can also scroll though them one-by-one with a sideways three-finger swipe on your trackpad, or by tapping a left or right arrow key on the keyboard while holding down the Control key. 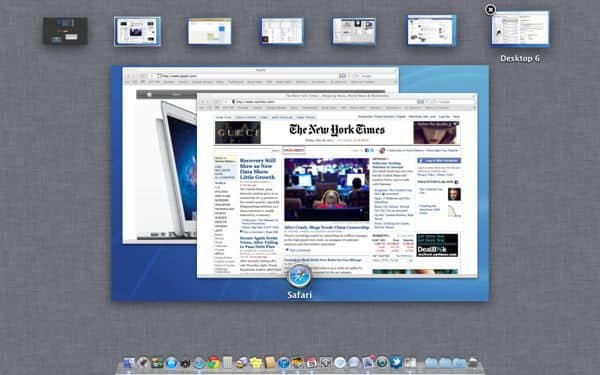 6. Want to start cleaning up your spaces? Activate Mission Control, then hold your mouse over the space you want to close until a circle with an “x” appears on its corner. Click the “x,” and poof—the space will disappear, with any open windows safely sliding over to one of your remaining spaces (so don’t worry, you won’t lose any work).

So, that’s the “what” and “how” of Mission Control’s desktop spaces—but what about the “why”?

As I mentioned earlier, the whole desktop “space” concept may take time to wrap your brain around—and indeed, it changes the way you work.

My wife, for example, used to love having all her open applications and documents on one desktop, or minimized in the Mac OS “Dock” where she could see them. For her, using virtual spaces was an unwelcome jolt to her daily desktop routine.

Personally, though, I love it—and my wife has come to depend on virtual desktop spaces, too. For me, it keeps my desktop activities organized and separated: all my mail is here, my photos are over here, my music’s there, and my calendar’s here. When it’s time to do the books in Quicken, I create a new space and start cranking away—and if work beckons, I can switch spaces, do what needs to be done, then return to my Quicken desktop “space,” with everything there just as I left it.

So, give it a try—and if you have more questions about desktop spaces, Mission Control, or Mac OS X Lion in general, just ask!