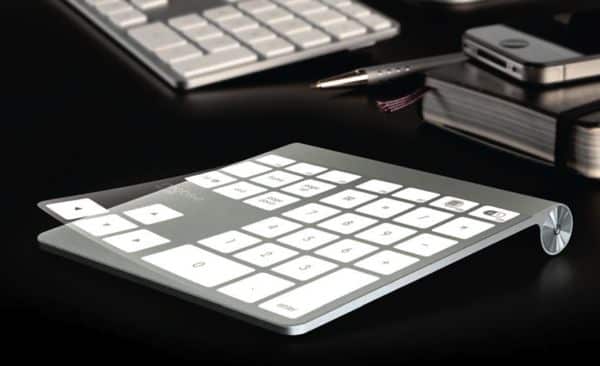 Don’t get me wrong: I like pinching and swiping as much as the next person. But when it’s time to balance my checkbook in Quicken, I long for an old-fashioned number pad—you know, the kind with ten number buttons and the oversize “enter” key.

Well, one option is to simply spring for an actual numeric keypad; indeed, several wireless models are available online for $10 and up. But owners of Apple’s touch-sensitive Magic Trackpad—which is increasingly a must for desktop iMac users, given all the clever new gestures available in Mac OS X “Lion”—might not want yet another keypad cluttering their work area.

Enter the Mobee Magic Numpad, a $30 package that includes a trio of reusable plastic films printed with number keys.

Just stick one of the films onto the Magic Trackpad (yes, the firms can be peeled off and reused), download and install the free Numpad software, and voilà—you’ve just turned your Trackpad into a numeric keypad.

The Numpad kit (which I’ve yet to test in person, by the way) comes with three films: one with a “classic” 22-key pad, leaving roughly half of the Magic Trackpad free for finger gestures; another with a “full” layout, complete with Home, End, and arrow keys; and a third with six customizable keys that you can label using the bundled permanent pen.

Interesting idea, although the Magic Numpad appears to be missing a key feature of a standard numeric keypad: physical keys, crucial for accurately tapping in figures while your eyes are focused on your bank statement.

My suggestion for Magic Numpad 2.0? Embossed “keys” that you can feel, perhaps with an additional nub on the “5” key so your fingers don’t get lost.