Mac tip: A “magic bullet” for speeding up a sluggish Mac? 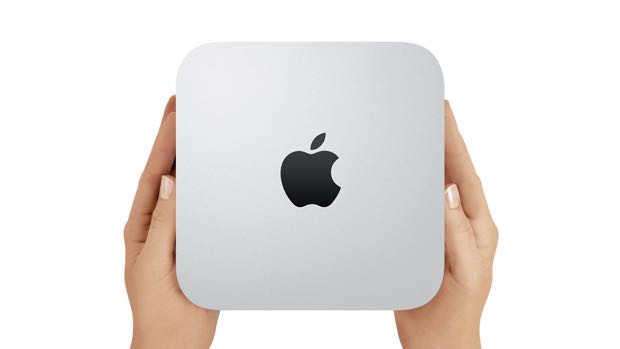 Page writes: I downloaded El Capitan and my Mac Mini (over three years old) slowed down…way down. Went to Apple help, they did a few “tricks” and it was back to normal for a bit. Then slow again. Have spinning beach balls and a very slow computer. Is there a magic bullet? Do I need a new computer? A memory upgrade? Please help!

Hi Page! Without taking a look myself, it’s hard to say what might be slowing your Mac Mini down, but there are a few things you can do to diagnose the problem yourself—and if you’re willing to spend a little cash, there may indeed be a “magic bullet” that’ll give your Mac a serious boost. 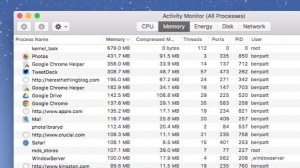 The Mac’s Activity Monitor app can tell you if there’s a program or process that’s slowing down your Mac.

First, you can try seeing what’s going on inside your Mac by launching the Activity Monitor app. You’ll find it sitting in the Utilities folder of your hard drive, or just do a Spotlight search for “Activity Monitor.”

Launch the app, click the Memory tab up at the top, then click the top of the long Memory column to sort the list of apps by the amount of system memory they’re using. See anything taking up an unusual amount of memory—more than a gigabyte? If so, try quitting the suspect program. (Note: You’ll probably see an entry for “kernal_task” at the top of the list; that’s an important Mac system process that should be left alone.)

Also, check out the Memory Pressure gauge at the bottom of the Activity Monitor window. Is the gauge smooth and green or do you see yellow and red spikes?

If you’re seeing spikes, that’s a sign that your Mac is running low on memory—and if you’ve got a three-year-old Mac Mini running on a new version of Mac OS X, that’s definitely a possibility.

Now, you were asking about a “silver bullet” for a slow Mac, and in my experience, here it is: a memory upgrade. It’s a quick way to give a sluggish system a big speed boost. Even better, memory upgrades are relatively cheap, and (so long as you’re handy with a screwdriver) you can generally do them yourself.

Now, not all Macs have “user-accessible” memory. Many of the latest, thinnest MacBooks, for example, are sealed tight, as is the 2014 Mac Mini. 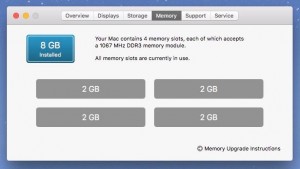 Check the “About This Mac” window to see if you can upgrade the memory on your Mac.

To see if you can upgrade your Mac’s memory, click the Apple menu in the top-left corner of the screen and select About This Mac. If you see a Memory tab, click it for details on how much memory is installed on your Mac, plus how many removable memory modules are available.

Click the “Memory Upgrade Instructions” link for details on how much more memory you can install, and how to install the modules yourself—typically a process that involves little more than loosening a few screws and snapping the (delicate) modules into place. For the Mac Mini, you don’t even need a screwdriver to open the case.

No “Memory” tab? If so, your Mac’s memory probably can’t be upgraded, although you can always search Apple’s support site to be sure.

In your case, Page, your three-year-old Mac Mini has slots for two removable memory modules, probably (I’m guessing) with 2GB of memory in each module, for a total of 4GB of RAM (short for “Random Access Memory”).

If you want, you could double that total to 8GB by buying a pair of 4GB memory modules, which (according to my quick research) would set you back about $40 or so. Want even more memory? If you have an “late-2012” Mac Mini model, you could spring for a total of 16GB of RAM (or a pair of 8GB modules) for $80-ish. Older Mac Minis can only handle up to 8GB of RAM.

You don’t even need a screwdriver to open the Mac Mini’s case.

One thing to keep in mind about memory upgrades: you must install modules in both memory slots on your Mac, and both modules need the same amount of RAM. In other words, if your Mac Mini has a pair of 2GB RAM modules installed, you can’t just replace one of the 2GB modules with, say, a new 8GB module. Instead, you’ll need to remove both the old 2GB modules and install (for example) a new pair of 4GB or 8GB modules. Sounds like a waste, I know, but that’s the deal. Update: While Apple recommends using only “matched pairs” of RAM modules, the DIY gurus over at StackExchange say that you can mix and match differently sized modules, so long as you don’t mind losing a tiny bit of performance. If you’re at all nervous about upgrading your RAM, though, you should probably stick with Apple’s guidelines.

You can shop for memory online; Amazon (which seems to sell everything and anything) sells memory modules, while sites like Crucial.com and Kingston.com will step you through the process of picking the right memory for your system.

Hope that helps, Page. Still have questions? Let me know!