So, how many of us actually use the “friend lists” feature on Facebook? I’m guessing that only a few hands are up—probably because until now, friends lists on Facebook have been a royal pain in the neck to create and use.

Well, all that’s about to change as Facebook, perhaps eyeing the success of the clever, easy-to-use “Circles” feature on Google’s new Google+ social network, rolls out a revamped version of its long-neglected friend lists, making them far easier to deal with—particularly when it comes to choosing who to share with … or not.

Facebook has the nitty gritty on its new, smarter friend lists (which should be going live within the next week) right here; for now, though, I’m just going to share what I think are the five biggest improvements, starting with… 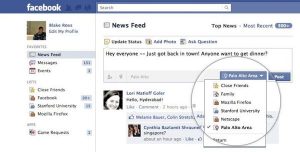 Just select a friends list from the drop-down menu to limit the audience for your latest updates.

1. “Smart lists” that create themselves
One of the first things you’ll notice once the new friend list go live will be a quartet of so-called “smart lists” for work, school, family, and city. These lists will be created for you automatically, based on the work, school, family, and city information in the Facebook profiles of your contacts—all with zero effort required on your part.

3. You can use friend lists to filter your News Feed
In addition to being able to select a friend list for sharing photos, posts, or other updates (which you can already do thanks to Facebook’s new sharing controls), the new friend lists feature will let you filter the crush of items on your Facebook News Feed. Click on the “Family” list, for example, and you’ll only see updates from your loved ones, or click “Work” to see only what your co-workers are up to.

4. The new “Restricted” list
A few of the new friend lists have special ramifications when it comes to what you see—and share—in your News Feed.

Those you’ve selected for your custom “Close Friends” list, for example, will have their updates appear in your News Feed more prominently, while posts from those relegated to your “Acquaintances” lists will take a back seat. (It’s up to you to populate the Close Friends and Acquaintances lists, by the way, although Facebook will chime in with suggestions.)

My favorite new list, though, is the “Restricted” list—a list of, ahem, “friends” who will never, ever get to see your updates and photos unless you’ve marked them as “public.”

Who might be worthy of banishment on the “Restricted” list, you ask? Well, maybe your boss, as Facebook suggests, or that nosy neighbor who keeps sending you friend requests.

With its new “Restricted” list, Facebook essentially matches a key feature in Google’s new Google+ network: the ability to toss acquaintances, supervisors, or frenemies who want to be your Facebook friend into a list where they can’t keep tabs on what you’re up to.

And in case you’re wondering, no—as with Google+ Circles, contacts in a given Facebook friend list won’t know what list they’re in, although they will be able to see who else is on the list.

5. You don’t have to use the new friends lists at all
For those who hate it whenever Facebook changes a feature, consider this: you can completely ignore the new friend lists if you want. And since the Close Friends, Acquaintances, and Restricted lists will remain empty until you fill them, there’s no need to worry about your News Feed changing based on the new lists feature.