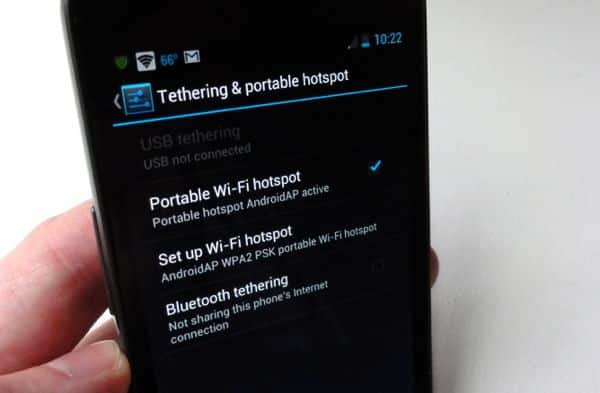 Could you replace your home cable modem with a personal hotspot? Can you use your phone’s hotspot and charge it at the same time? Will a Wi-Fi-only iPad work with a 3G or 4G mobile hotspot? Read on for answers to those questions, and more!

Jessica asks: Would it be a bad idea to use a hotspot as my Internet source for my apartment? It would only be used for one laptop and is much cheaper than going through an Internet provider.

You certainly could—indeed, it’s something I’ve considered doing myself. Keep in mind, though, that most mobile hotspot plans involve a data “cap” of some kind, similar to the data limits on your smartphone plan.

Not sure that a mobile Wi-Fi hotspot is? Click here!

If you exceed your monthly data limit—easily done if you’re a fan of instant videos on Netflix, or the free TV shows on Hulu.com—your mobile hotspot bill will start to creep up, and up … and up.

Consider this: If you have a 4 gigabyte-a-month mobile hotspot plan and you decide to rent an HD movie from iTunes, that one movie could easily weigh in at 2 GB or more. Rent a second HD movie, and there goes your monthly data allowance. Rent a third, and you’ll end up paying overage charges. (Think $10 or so for every gigabyte over your monthly data cap.) Pretty soon, your old cable Internet bill might not look like such a bad bargain.

Click here for more on how much data you might end up using on your personal hotspot.

Yaya ask: Are these used only to connect to the Internet or will they also allow you to make phone calls in an area where there is little to no signal? I am sick of my phone getting cruddy service. Will this help?

Well, possibly. Here’s a scenario for you: say you’re out and about with your iPhone on AT&T, and you can’t get a signal. If you had a 3G iPad with Verizon data service that was getting a signal, you could connect your iPhone to your iPad’s mobile Wi-Fi hotspot and make an Internet voice call—say, using Skype.

If, on the other hand, you only have your AT&T iPhone on your and there’s no AT&T signal, your iPhone’s built-in mobile hotspot (which relies on a cellular data connection) won’t do you any good.

And just to clear up any confusion, remember that mobile hotspots (including both stand-alone models and ones that are built into smartphones) are designed only for sharing cellular data with nearby Wi-Fi-enabled gadgets; they don’t enhance standard celluler voice calls.

Ashley asks: I bought an iPad 2 with only Wi-Fi, and not 3G. If I were to buy a portable Wi-Fi hotspot, like a Mifi or another portable device from Verizon or AT&T, would I be able to access it from my iPad 2 although it doesn’t have a SIM card to access the 3G network? I thought that because the hotspot was sending a 3G signal, that for some reason the iPad wouldn’t accept the signal since it doesn’t have 3G. 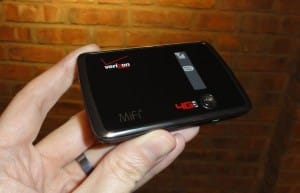 A stand-alone, portable hotspot (like this one from Verizon) is typically small enough to fit in the palm of your hand.

Good question, and the short answer is yes—you canuse a 3G or even 4G mobile hotspot with a Wi-Fi-only iPad.

How is that possible? Because a portable hotspot transmits a standard Wi-Fi signal that’s compatible with any Wi-Fi-enabled gadget, including the Wi-Fi-only iPad.

Monica asks: If I don’t have service on my phone can I still use my mobile hotspot and be able to send texts and stuff through that hotspot?

If you have a stand-alone mobile hotspot, then yes, you could use it for surfing the web, making Internet voice calls, or sending text messages (again, via the Internet) over a phone that doesn’t have cellular service—assuming, of course, your phone has Wi-Fi.

Example? I happen to have a Samsung Galaxy Nexus smartphone without any cellular service, but I can connect it to my stand-alone Verizon 4G hotspot for checking email, sending text messages via Google Voice, or making phone calls over Skype.

DarthStrawberry asks: If I turn off 3G cellular data on my phone and am only using my house’s Wi-Fi will I still be charged for hotspot-ing?

Whether we’re talking about regular smartphone data or mobile hotspot plans, you’re only charged for the cellular data you use (well, including your monthly minimum charge, typically about $25 and up).

If you’re at home and you switch from using cellular 3G or 4G data to your home Wi-Fi network (which, I’m assuming, is connected to your cable Internet modem), then no—that won’t count against your cellular data use.

6FigureSassy asks: Am I able to charge my iPhone while using as hotspot?

Yes, you sure can, but keep in mind that your iPhone (or any smartphone, for that matter) will start to run hot when you’re using it as a mobile hotspot, and charging it at the same time will ramp up the heat.

You probably won’t damage your handset, but it may become too hot to handle for more than a few seconds.

Good question! When you stream videos from iTunes on your Mac or PC to your Apple TV, you’re doing so over a “local” Wi-Fi network—meaning you’re not using any outside Internet data for streaming.

Theoretically, that means if you connect both your computer and your Apple TV to your iPhone’s mobile hotspot, you should be able to stream movies from iTunes on your PC (or Mac) to your Apple TV without using any mobile data. But to be sure, I conducted a little test using my stand-alone Verizon 4G hotspot.

First, I tried streaming a movie from iTunes on my iMac to my Apple TV, and after 10 minutes I’d only used about 15 megabytes of data—hardly anything, and even that small amount of data use was probably just my iMac checking for e-mail in the background.

When I tried streaming an iTunes movie directly over the Internet, though, my mobile hotspot chewed through 325 MB of data—in just 8 minutes. Whoa.

So yes, you should be fine using your iPhone’s mobile hotspot for local iTunes streaming. Good luck!