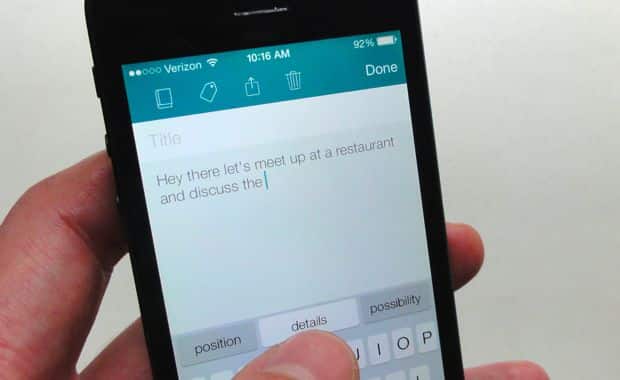 One of the more intriguing new iOS 8 goodies coming to iPhones and iPads this fall is QuickType, a “predictive” typing feature that pops up a trio of buttons above the standard keyboard with suggestions for your next word.

Nice, but here’s the thing: you can actually try a little predictive typing on your iPhone or iPad right now, all thanks to a free iOS app.

Available for iPhone and iPad since earlier this year (and long available for Android phones), SwiftKey Note bills itself as a note-taking companion with a clever twist: a keyboard that—yep, you guessed it—suggests words while you type. 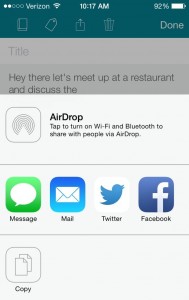 To send a SwiftKey-composed message as an email or a text message, you’ll need to first tap the Share button and paste it into the appropriate app.

Not only does SwiftKey try to guess the current word you’re trying to type, it also does its best to predict your next word before you type it.

Type “Hey,” for example, and SwiftKey will immediately start popping up suggestions—in my case, “guys,” “man,” and “there.”

Like one of the guesses? If so, just tap the corresponding button to paste the word into your note. Want a different word? Then keep typing until SwiftKey gets it right, as it almost invariably does.

And what about the suggested words themselves? Not bad, actually, particularly if you’re writing one of those “let’s get together for lunch”-style messages.

In one note, I started by typing “Hey there’s let’s meet up at a,” and SwiftKey immediately guessed “restaurant” when I typed the “r” key. Next, it suggested “and,” and it correctly guessed “discuss” once I typed “di.” The word “the” came next, followed by “position,” “details,” and “possibility.” “Details” was close enough, so I went ahead and tapped that button.

Of course, using SwiftKey to tap out a note takes getting used to. Indeed, I’m betting that my first several SwiftKey notes took longer than they would had I just tapped them out using the standard iPhone keypad.

But practice makes perfect, and I eventually grew better at keeping an eye on SwiftKey’s trio of suggestion buttons as I tapped out my words. The makers of SwiftKey also promise that the app will get better at guessing your words the more you use it.

The biggest problem with the SwiftKey keypad is that you can only use it within the SwiftKey Notes app. To send a SwiftKey-composed message as an email or a text message, for example, you’ll need to first tap the Share button and paste it into the appropriate app.

That’s set to change this fall, though, once Apple’s iOS 8 update for the iPhone and iPad finally grants third-party app developers (like those behind SwiftKey) access to the main iOS keypad.

By then, though, SwiftKey will be competing with Apple’s strikingly similar QuickType feature. Will there be room for both? Stay tuned.

Android smartphones already let you swap out the “stock” Android keypad for a third-party keyboard such as SwiftKey or Swype, the innovative (and addictive, if you ask me) swipe-to-type app.