The only problem is that such “battery saver” modes (which conserve power by cutting down on background activity, dimming the screen, and halting automatic email fetching) won’t do you much good if your battery runs out of juice before you remember to switch on the setting.

Unfortunately, iPhone and iPad users must turn on iOS 9’s new “Low Power Mode” manually (you’ll be prompted to turn on the setting once your battery falls below a certain level). 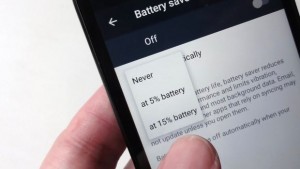 In just a few taps, you can set Android’s “Battery saver” feature to turn on automatically.

Here’s what you do…

Now, just go back to using your Android device—and whenever its battery level falls below 15 percent (or 5 percent, depending on the setting you picked), “Battery saver” mode will turn on automatically.

You can find iOS’s “Low Power Mode” feature by tapping Setting. Battery. but the only setting that’s available is an “on/off” switch. Hopefully, Apple will see the light and add its own “Turn on automatically” setting.