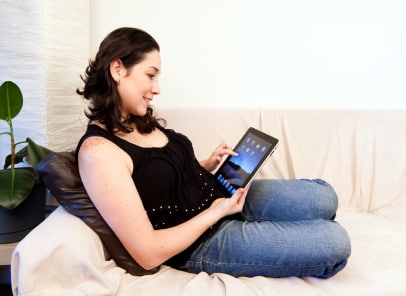 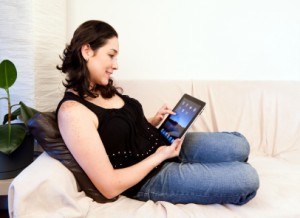 Thinking about getting a tablet like the iPad, but not sure when—or where—you’d ever use it? Personally, I love to fiddle with my iPad while I’m lounging in front of the tube or right before I turn off my bedside lamp, but that’s just me. For some results that are a bit more scientific, let’s turn to the researchers at Nielsen, who recently finished quizzing more than 12,000 tablet, e-reader, and smartphone users about their “connected device” habits.

The results? Turns out I’m not the only one who brings the iPad into the bedroom, with a full 57 percent of tablet owners telling Nielsen that they’ve been known to tap away on their slates while tucked into bed. Even more popular than the bedroom, however, is the den, with a whopping 70 percent of tablet users toting their iPads and Android devices while watching TV.

So, you ask, what are we doing with our iPads while the TV’s on—or in our pajamas, for that matter? Unfortunately, Nielsen’s survey summary doesn’t go into that level of detail; speaking for myself, however, I can often be seen checking my email, sneaking a peek at the headlines, or arranging tiles in a “Words with Friends” match—particularly when, say, “Glee” (or another show that I’m not a particular fan of) is on. And in bed, I’ll often switch to something that requires a little more concentration: a magazine, a lengthy article that I saved on Instapaper, or a full-on book.

Speaking of books, the Nielsen researchers also checked in with owners of e-readers like the Kindle, and they noticed something quite interesting: while e-reader owners love taking their devices to bed even more than tablet users do (61 percent to 57 percent, the survey says), they’re not fans of Kindl-ing in front of the TV (just 35 percent, compared to 70 percent for tablet users). Why? Probably because it’s hard to dive into the latest James Patterson thriller (no relation, by the way) while the television is blaring away.

So, anyone out there still circling the iPad, but can’t quite figure out when they’d want to use it? On the flip side, any iPad owners want to share when—and where—they most often use their tablets?