How to re-enable sorting for instant Netflix videos 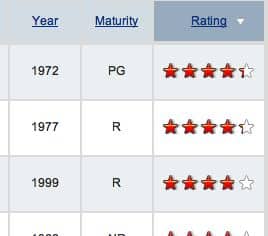 Thousands of Netflix subscribers howled in protest last week after a controversial site redesign left movie lovers without the ability to sort streaming “watch instantly” movies by year, MPAA rating, or star rating. But a simple tweak to the Netflix URL will have you sorting again in a jiffy.

The clever tip comes from Hacking Netflix and its intrepid readers, who found that if you visit a main genre page (like “Comedies” or “Dramas”) in Netflix’s instant streaming collection and add a few characters of code—”&vt=tl”, to be precise—to the end of the website address, you’ll re-enable the now-missing sort ability:

I’ve tried the tip myself and yes, it works.

Just type "&vt=tl" at the end of the URL for a Netflix "Watch Instantly" genre page to re-enable video sorting.

Nearly 5,000 comments—mostly angry—have piled up on the official Netflix blog post that first announced last week’s site redesign, which added larger, scrolling box art for “Watch Instantly” movies and TV shows but (inexplicably, if you ask me) removed the ability to sort by year, MPAA rating, and star rating.