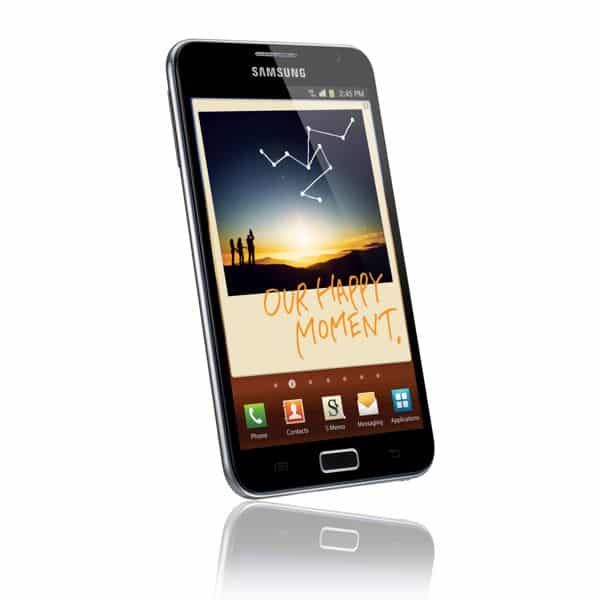 And I thought phones with four-inch screens were big. Check out the Samsung Galaxy Note, a new, Android-powered superphone with an eye-popping 5.3-inch display, nearly two inches larger than the iPhone’s puny 3.5-inch screen.

Unveiled Thursday at the IFA technology conference in Berlin, Germany, the Note comes with most of the amenities you’d expect in a high-end Android phone, including an ultra-fast 1.4GHz dual-core processor (“dual-core” means two processors on a single chip, good for speedier and more efficient performance), front- and rear-facing cameras, HD video recording, and 4G wireless networking.

But the Note’s show-stopping feature has to be its glorious screen—all 5.3 inches of it, measured diagonally.

The Note’s jumbo touchscreen also comes with its own stylus for jotting down random thoughts or sketches. The so-called “S Pen” stylus slides into a hole on the bottom of the phone.

Just to be clear, I haven’t had the chance to see the 9.65mm-thick Galaxy Note in person yet, although the gadget bloggers at This Is My Next assure us that “our jaw is on the floor” when it comes to the “amazing” screen.

That said, here’s my question: is there such a thing as “too big” with smartphones? After all, here’s how I described the recent HTC Infuse 4G, an Android phone with a mere 4.3-inch display:

…while the Infuse feels pleasingly light and thin, there’s no getting around its outsized dimensions; the phone pretty much took up my entire jeans pocket, and it felt as big as a plate when I was holding it against my cheek during (loud and clear) phone calls.

Word is that the Note (which has yet to get a price tag or release date, by the way) also feels quite slim and trim, but with its huge 5.3-inch screen, it can only be more plate-like than the Infuse.

So, here’s my question for you: how big is too big when it comes to your phone? And at what point does a huge smartphone turn into a small tablet?