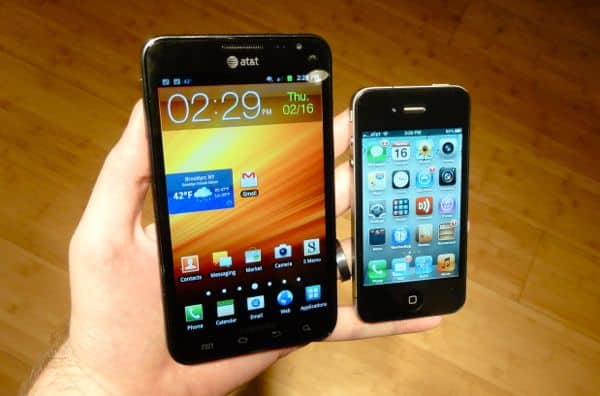 Is it a phone or a tablet? That’s the big (and I do mean “big”) question about the Samsung Galaxy Note, a new and gargantuan Android phone that—if you ask me—tries a little too hard to do it all.

Slated to go on sale February 19 through AT&T, the Galaxy Note ($299 with a two-year contract) ups the ante to an almost absurd degree in terms of smartphone screen size.

Measuring 5.3 inches diagonally, the Note’s eye-popping “Super OLED” screen is about an inch larger than many of the biggest Android phones on the market, and it makes the iPhone’s 3.5-inch display look positively puny in comparison.

Indeed, the Galaxy Note’s display is so massive that it comes with its own stylus, which slides into a sheath molded into the Note’s 0.4-inch-thick shell.

And in case you’re wondering, yes: the relatively svelte Note will fit in a jeans pocket, though only just.

Armed with a “dual-core” processor (meaning two processors on a single chip, for speedier multitasking and more efficient power usage), dual cameras (one in front for video chat, another in back capable of HD-quality video recording), and 16GB of memory (expandable to a total of 48GB with an optional microSD memory card), the 6.3-ounce Note ranks right up there with other state-of-the-art Android phones.

The Note also supports AT&T’s just-launched 4G LTE network for ultra-fast cellular data—again, on a par with other leading Android phones. And while the Note’s version of the Android OS—2.3 “Gingerbread”—is a bit behind the times, Samsung is promising an update to the latest version of Android, 4.0 “Ice Cream Sandwich,” in the near future.

Which brings us back to the Note’s main claim to fame: its massive display, coupled with a stylus (or “S-Pen,” as Samsung calls it) that might spark memories of the old, pre-iPhone Palm Treo.

First, let’s cover the positives, stating with the gorgeous display itself. Thanks to a technology called OLED (which employs light-emitting pixels rather than the backlighting used in a standard LCD), the Note’s display looks startlingly vivid, with colors that pop off the screen. And with a resolution of 1280 by 800, the Note’s razor-sharp display qualifies as true HD quality.

In short, the Note’s screen is a sight to behold—and indeed, I was shocked by how puny my iPhone 4’s “retina” display started to look as I switched back and forth.

Nice, but what does the Note’s huge display mean in practical terms? Well, for one thing, text on web pages is far easier to read, and you’ll certainly one-up your friends when it’s time to swipe through your respective family photos. Videos look amazing (yes, you can watch an entire Netflix movie without having to squint) and typing on the Note’s roomy keypad is a cinch.

Then there’s the S-Pen: a slender stylus that lets you swipe and tap anywhere on the Note’s expansive display. Basically a smaller version of those Wacom pens used by digital designers, the S-Pen is entirely optional; you don’t ever have to touch it if you don’t want to. (A replacement S-Pen goes for $29, incidentally.)

You can, however, use the stylus to swipe through your home pages, tap on apps, draw little doodles using Samsung’s custom S-Note app (the lines you trace will get thicker or thinner depending how hard you press), or scrawl notes in the margins of web pages and send them back to the office. There are even a handful of apps that have been specifically optimized for the S-Pen, including Fruit Ninja (the popular fruit-slashing game) and Polaris Office.

All very impressive—and hey, were “bigger” always “better,” the Galaxy Note would, hands-down, be the best smartphone on the market.

But in stretching the Note’s display to a full 5.3 inches, Samsung may have poked a hole or two in the screen-size envelope.

Consider using the Note palmed in one hand while tapping with a thumb, a maneuver I perform regularly when I’m out and about with a smartphone. On the Note, just trying to tap the Contacts icon on the far side of the screen with my thumb is something of a stretch. But as far as the tabs at the top of the main Contacts screen go, forget it; my thumb simply can’t reach, or not unless I scoot the whole handset down on my palm.

Making phone calls on the Note is also an odd experience, akin to holding a salad plate against my cheek—although it must be said, call quality on the Note was pretty good, especially compared to my unreliable iPhone 4 on AT&T.

Then there’s the S-Pen, which lets you touch, tap, and swipe anywhere on the screen—well, anywhere except for the four main Android buttons (Menu, Home, Back, and Search) below the display.

If you want to go Home Back with the stylus, you’ll need to press a small button on the S-Pen’s shaft while swiping down or across. That’s the theory, anyway. In practice, I found that the S-Pen’s “Home” and “Back” gestures were somewhat hit-and-miss. I finally gave up and stowed the S-Pen in favor of my fingertip for navigating around the Note’s screens and menus. (It’s worth noting that a garden-variety tablet stylus worked just fine on both the Note’s screen and its Android buttons, although you don’t get the benefit of pressure sensitivity while you’re sketching.)

And while the Note’s screen is simply massive for a smartphone, it’s also a little too small (or at least, too small for me) to qualify as a tablet, or even a mini-tablet. Samsung’s superb Galaxy Tab 7.0 Plus, for example, is just two inches bigger (measured diagonally) than the Note, yet its screen feels much roomier—and yes, more like a real tablet.

In other words, if you were hoping the Note might double as both a smartphone and a tablet, well … not so much.

Now, if you are looking for a phone with a screen that’s bigger than the iPhone’s, I’d consider an Android phone with a four or 4.3-inch display—like, say, Samsung’s own Galaxy Nexus, one of Motorola Droid phones, or any number of other jumbo-screened Android handsets. Personally, I think a four-inch smartphone hits the sweet spot in terms of size and convenience, which is why I’m hoping the next iPhone stretches its screen by a half-inch.

Of course, it’s always possible that the Note’s size and stylus may perfectly suit your specific needs; for example, if you’re a phone-savvy sketch artist who wants a roomy, stylus-packing handset that fits in a pocket. If that’s the case, by all means—give the Note a try.

For the rest of us, though, the novelty of the Note’s massive screen may quickly wear thin, leaving us with an Android phone that’s somehow both too big and (as tablet wanna-be) too small.

Have any questions about the Samsung Galaxy Note? Post ’em in the comments below.

Note: Samsung and AT&T provided me with a loaner Galaxy Note to review, and I’ll be returning it once I’m finished testing.