Top 5 ways that “Lion” turns your Mac into an iPad 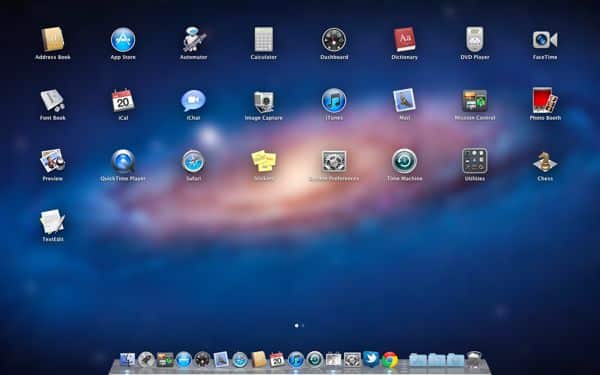 Well, Apple’s just-released “Lion” system update packs in a series of swipable, pinchable, and scrollable new features that will make iPad users feel right at home on their iMacs and MacBooks.

Read on for five ways in which Lion tries to turn your existing Mac—yep, the one sitting on your desk right now, or perhaps in your lap—into an iPad.

1. All-new iCal, Address Book, and Mail applications
The first time you fire up Apple’s iCal after installing Mac OS X “Lion” ($30, available now from the Mac App Store), you might do a double-take.

Yep, the new iCal looks and feels almost exactly as it does on the iPad, right down to the leather-colored borders, the tabs for Day, Week, Month, and List views along the top (the new desktop Lion substitutes “Year” for “List”), and even the little graphical remnants of torn-off calendar pages near the top of the screen. 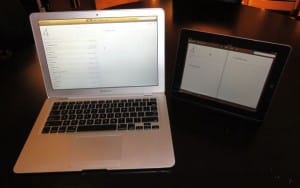 Same goes for the new Address Book. Again, you’ll find the “leather” binding from the iPad version, with a red bookmark icon for your contact groups, a long list of names on the left-hand page, and a smartly formatted contact page on the right.

Last but not least, the new Mail—you guessed it, now looking an awful lot like it does on the iPad, complete with a two-column view that puts a list of messages in the left-hand column and the body of a selected message (with previous messages in a given “conversation” laid out beneath in reverse-chronological order) on the right. (Yes, you can “unhide” a third column with the traditional list of mail folders, if you wish.)

2. Full-screen mode makes your programs feel like “apps”
Strictly speaking, there’s absolutely no difference between a garden-variety computer program, like Microsoft Word, and an app on the iPad, like Pandora.

But there’s something a little more … well, friendly about smartphone and tablet apps, especially when it comes to the iPhone and iPad. Instead of cold, clunky programs trapped in a desktop window, they’re sleek, visually appealing (well, usually anyway), and they take up the entire screen for themselves.

Lion brings the iPad’s “app” feel to the Mac with its new full-screen mode, which lets supported programs (like Apple’s Safari web browser, iTunes, and iPhoto) expand to fill the entire display. 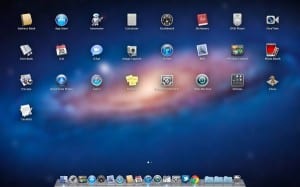 The new "Launchpad" in Mac OS X "Lion" looks an awful lot like the grid of app icons on the iPad's home screen.

3. The Launchpad
Opening a program on the Mac used to be a matter of either double-clicking a desktop icon, selecting a program icon that youdragged into the “dock” at the bottom of the screen, or digging through the Applications folder—not a lot of fun, that.

In Lion, though, you can launch and organize apps in the same way you do on an iPad. Click the new Launchpad icon at the bottom of the screen, and a very iPad-like grid of apps will appear; you can click one to launch it, or swipe with two fingertips to see additional pages of icons.

Want to group icons together into folders? Just like you would on the iPad, you drag one icon on top of another to create a folder, then drag more icons into the new folder to add to your collection.

Had enough of a particular app? Just click it and hold until all the app icons begin to shake, then click the little “x” sitting on the corner of the app—again, just like the iPad.

4. Fast app switching
On the iPad, you can quickly switch between apps by double-clicking the Home button and flicking through the row of app icons that appears at the bottom of the iPad screen. In Lion, you can do much the same thing with its clever new app switcher. 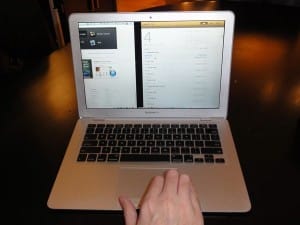 A three-finger swipe is all it takes to switch from one app to another in Lion.

Just swipe one way or the other using three fingertips on your MacBook’s trackpad (or with the optional, $69 Magic Trackpad if you have an iMac), and you’ll see your various open applications and even browser windows slide back and forth on the screen. Sounds basic, but beware: it’s surprisingly addictive, as I’m quickly finding out.

And speaking of swiping…

5. Pinching, swiping, and double-tapping
The iPhone (and later the iPad) changed the way we navigate and zoom in and out of images and web pages by letting us swipe, double-tap, and even “pinch” with our fingertips.

Lion brings many of those same gestures to the Mac. Now you can “pinch” a snapshot in iPhoto to zoom in, swipe through open application windows (as I just mentioned) with a three-finger swipe, or flick “up” with three fingers to launch Mission Control, a new “Lion” feature that lets you see all your open windows and applications at once. Neat.

Have questions about Lion? Let me know!