iPhone or Android? 6 questions to ask yourself before deciding (updated) 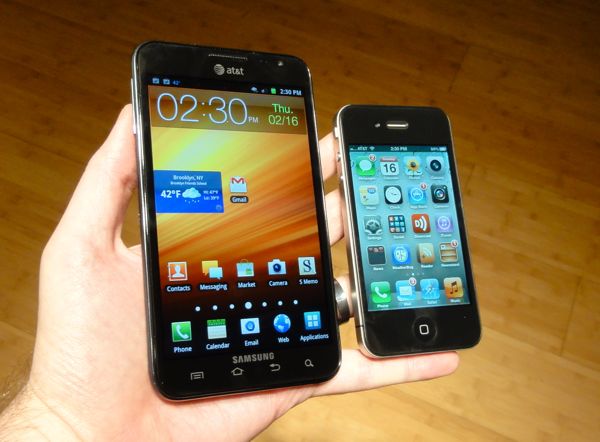 Not sure whether to spring for an iPhone or go the Android way? Well, there’s more to the decision than just flipping a coin.

My advice? Don’t pick a new iPhone or Android smartphone until you answer six crucial questions for yourself, starting with…

1. Do smartphones scare you?

When you fiddle with the latest and greatest phones at your local carrier store, do you feel like a deer in the headlights?

Afraid you’ll break something if you tap one of the little icons on the screen?

If so, think twice about Android. Personally, I’m a sucker for all the settings and personalization options on an Android phone, but the thicket of menus and sub-menus may feel bewildering for beginners, or anyone easily frustrated by tricky phone interfaces.

The iPhone, on the other hand, boasts (if you ask me) a clean, simple interface that’s perfect for smartphone novices, while also jettisoning the extra “menu” and “back” buttons that make navigating the standard Android interface such a chore.

2. Do you want a physical QWERTY keypad?

Tapping out lengthy messages on a virtual keypad can be royal pain if you have clumsy fingers, and even those with nimble fingertips may prefer the feel of actual keys to a slippery glass touchscreen.

So if a physical QWERTY keypad is a must, go with Android. Several makes and models of Android phones with roomy, full-on keypads are available. In some cases, the keyboards slide out from behind the touchscreen (like so), while others sit on the front of the phone, just beneath the display.

Apple, on the other hand, shows no signs of making an iPhone with a physical keypad—and while it is possible to connect a wireless Bluetooth keyboard to, say, the iPhone 4S, you’d also have to tote the keyboard accessory wherever you go.

3. Do you depend on Gmail and Google Calendar?

One of the beauties of Android is that the initial setup process is a piece of cake—for Google users, anyway.

If you have a Google account, you can take your new Android phone out of its box, power it up, sign in with your Google ID and password, and presto! All your Gmail messages, mailboxes, Google contacts and calendars will start syncing to your handset automatically. It’s a beautiful thing.

Just as Gmail and Google Calendar users will have an easy transition to an Android phone, so will Mac users glide right into an iPhone—particularly if you’re storing your contacts in the Mac OS X Address Book and using iCal for your calendars.

The desktop iTunes software will quickly sync all your Address Book contacts and iCal calendars to a new iPhone (along with all your apps and music, of course), while Apple’s new iCloud service (coupled with iOS 5, the latest version of the iPhone system software) will coordinate all your desktop and iPhone contacts and events wirelessly, no cords required.

Ever visit a website on a smartphone, only to see a blank panel on the page that reads “Adobe Flash plug-in required”?

That’s because some of the snazziest sites on the web depend on a technology called “Flash” for displaying videos and fancy graphical menus—and without Flash, those sites won’t function properly.

The latest Android phones do support Flash content, meaning just about any site on the web should render properly—and completely.

That’s not the case with the iPhone, though. Indeed, Apple has been openly critical about Flash technology (the late Steve Jobs once called it a battery hog, a slow-poke, and a security concern) and has essentially declared both the iPhone and iPad to be Flash-free zones.

Keep in mind, however, that more and more Flash-heavy websites offer alternate versions tailored for non-Flash smartphones like the iPhone—a development that may eventually render mobile Flash support a moot point.

While Android boasts one of the liveliest communities of app makers around, Apple’s App Store is the undisputed king of mobile applications. Its shelves are stocked with 500,000 apps and counting (compared to a still quite healthy 350,000 or so for Google’s Android Market), and the most interesting and exciting applications and tend to be built for the iPhone first.

Angry Birds, for example, didn’t land on Android until nearly a year after debuting on the iPhone, while Android users had to wait nearly a year and a half for their own version of the wildly popular Instagram.

Still debating whether to go with Android or the iPhone? Let me know!

Note: This updated and revised post was first published in August 2011.

Please read the community policy before posting a comment. I welcome calm, constructive, and helpful comments on this article; however, I will delete any comment threads that veer into angry, fanatical “iPhone vs. Android” territory.